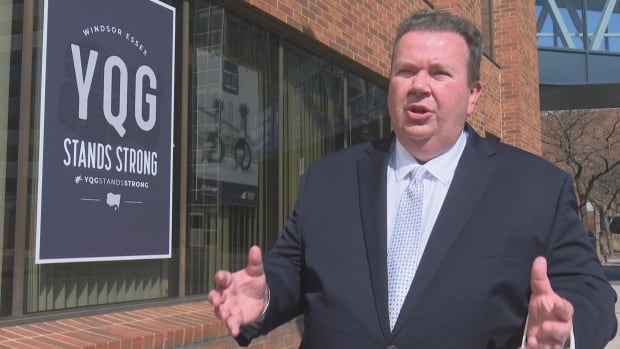 The expected end of pre-arrival COVID-19 testing for travellers entering Canada will be a “lifeline” for tourism in the Windsor area, the head of Tourism Windsor-Essex said Wednesday.

The federal government is expected to announce the new policy on Thursday, with sources telling CBC News that Canada will remove the testing requirements at land border crossings, and airports.

Currently, travellers entering Canada must show proof of a negative test prior to their flight, or arrival at the border; that requirement is expected to be dropped by the end of March.

“This is a gigantic step forward to that path to reopening that we’ve been looking at,” said Tourism Windsor-Essex CEO Gordon Orr. “It’s a lifeline to our American visitation.”

One example, Orr said, is Caesars Windsor: about 33 per cent of visitors to the casino are from the U.S.

Americans account for 25 per cent of visitors to wineries in the Windsor-Essex area, as well, he said.

Sarnia Mayor Mike Bradley also supported the change, and said a group of mayors of border cities sent a letter to Prime Minister Justin Trudeau more than a week ago asking for the testing requirement to be dropped.

“We were working with the hospitality industry and the tourism sector, and people start to plan their vacations for the spring and the summer now,” he said. “And with the testing still in place, it was an impediment.”

“With its being gone as of April 1, if that’s correct, it will start to open the gates to more tourism coming back into this country,” Bradley said. “It’s going to take time because people are getting used to this new life after COVID. But it does get rid of one substantial barrier to come into Canada.”

However, he said he’d like to see the requirement dropped sooner.

“I think they can … end it right now,” Bradley said. “There’s no reason to keep on making people go through this process to the end of the month when they’re acknowledging it’s simply not necessary.”

Rakesh Naidu, president of the Windsor-Essex Regional Chamber of Commerce, agreed that the timeline should be moved up.

“It should have been put in place earlier just because we know that … most of the people that are allowed to cross the border are the vaccinated ones,” he said. “There’s a huge number of international travellers that are fully vaccinated and boosted.”

“So in some way, we have taken all the measures we can to keep our borders safe, to keep our community safe,” Naidu said. “Yes, there will be always an element of risk. … But I think it is time for us to really open it up further, take away the restrictions, give businesses the hope, give them the ability to to really manage their business, run their business in an environment that doesn’t feel like that their hands are tied behind their back.”

Naidu said the removal of testing requirements will be “great news” for businesses in Windsor-Essex.

“It’s been over two years now that the border has been restricted, and that has really dampened the business environment here,” he said. “It continues to affect us.”

“This has affected all kind of businesses, but it’s specifically those businesses that rely on traffic, foot traffic,” Naidu said. “Are American visitors coming across to shop, to really take part in the various events that we have here, to experience the wineries that we have here, to shop in the local stores, to go to the restaurants? So many businesses rely on the American visitors, and that’s been restricted for two years.”