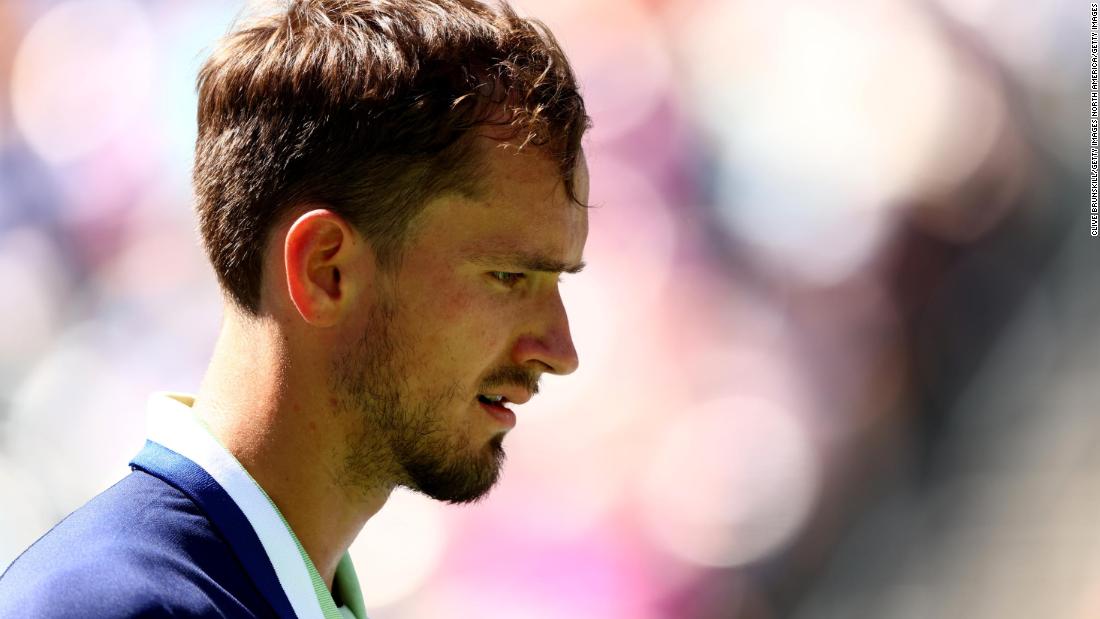 Asked at a UK Parliament select committee meeting on Tuesday about Medvedev competing at Wimbledon, British Sports Minister Nigel Huddleston said he may seek “assurances” that the Russian star, who won his first grand slam at the US Open last year, does not support Russia’s invasion of Ukraine.

“Absolutely nobody flying the flag for Russia should be allowed or enabled,” said Huddleston.

“We need some potential assurance that they are not supporters of Putin and we are considering what requirements we may need to try and get some assurances along those lines.”

Huddleston said he was in touch with the tournament organizers, the All England Lawn Tennis Club (AELTC), and that discussions were taking place.

CNN reached out to the AELTC but has not received an immediate response.

Current rules allow Russian and Belarusian players to compete on the men’s ATP and women’s WTA tour but only as neutral athletes.

Russia and Belarus, which helped stage the invasion of Ukraine, are banned from team events such as the Davis Cup and the Billie Jean King Cup as sport continues to turn its back on Putin.

“My message is always the same — I want peace in all of the world,” Medvedev told reporters earlier this month when asked about the war.

CNN has contacted Medvedev’s team about Huddleston’s comments but did not receive an immediate response.

However, WTA head Steve Simon said he does not want players to be banned if they don’t publicly criticize the “decisions of an authoritarian leadership.”

“You never know what the future may bring,” Simon told the BBC Tuesday.

“But I can tell you that we have never banned athletes from participating on our tour as the result of political positions their leadership may take.

“So it would take something very significant for that to change, but again we don’t know where this is going.”

The WTA would have to change its rules should the government decide to ban Russian players but Simon said it would not be a move he supports.

“I feel very strongly that these individual athletes should not be the ones that are being penalized by the decisions of an authoritarian leadership that is obviously doing terrible, reprehensible things.”

Wimbledon is scheduled to run between June 27 and July 10.