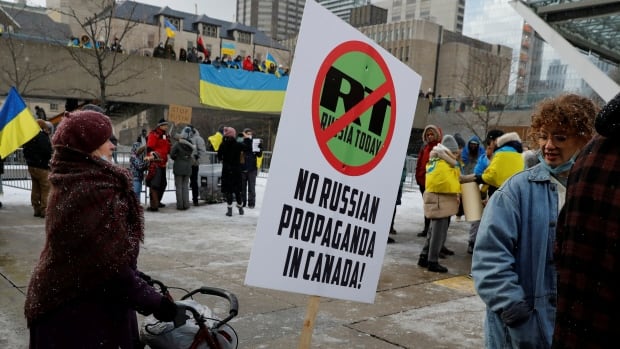 Canada’s telecommunications regulator will announce this afternoon whether it will ban the state-controlled Russian television network RT from Canadian airwaves.

The multilingual 24-hour news channel launched in 2005, when it was known as Russia Today, and now appears in more than 100 countries, according to its website.

Funded by the Russian government, the channel has long been described by critics as a propaganda outlet for the Kremlin.

Speaking today in Toronto, Canadian Heritage Minister Pablo Rodriguez said he commends YouTube for taking down the RT channel on its website and hopes the CRTC follows its example.

“We’ll see what the CRTC does but in my opinion it shouldn’t be here. I’m looking forward to hearing from the CRTC on that,” he said.

If the regulator removes RT from a list of foreign channels authorized for distribution in Canada, broadcasters in Canada would not be permitted legally to carry the channel. The decision is expected around 4:30 p.m. ET today.

Jason Woycheshyn, president of the Ukrainian Canadian Bar Association, also asked the CRTC to ban RT. He told CBC that his organization believes there is “no need [for] or interest” in Russian propaganda in Canada.

“That’s the basis upon which we are requesting that the CRTC ban all access, whether it be on the airwaves, television, radio or internet, to Russia Today or any other state-sponsored propaganda media Russia is currently promoting,” he said.

On Feb. 27, Rogers, Bell and Shaw announced that they would no longer carry RT.

“Customers who subscribe to RT as a pick and pay service will receive a credit in the next billing cycle,” Shaw said in a tweet at the time.

The following day, Prime Minister Justin Trudeau said that while broadcasters had started removing RT from their lineups, he would ask the CRTC to review the broadcaster’s licence to ensure the any decision to ban the channel goes through an arm’s-length process.

“There is a significant amount of disinformation circulating from Russia, including on social media, and we all need to keep calling it out,” Trudeau said at the time.

The day after Trudeau’s announcement, Regina-based Access Communications announced that it too was removing RT from its AccessNexTV Stream lineup.

Rodriguez was in Toronto to announce that in response to Russian disinformation being spread online and through social media, his government is seeking proposals to help identify misinformation and disinformation online.

The $2.5 million being offered by the federal government will fund projects to “help increase civic literacy, promote critical thinking when it comes to validating sources of information, and build capacity in Canada to fight disinformation online,” a government statement said.