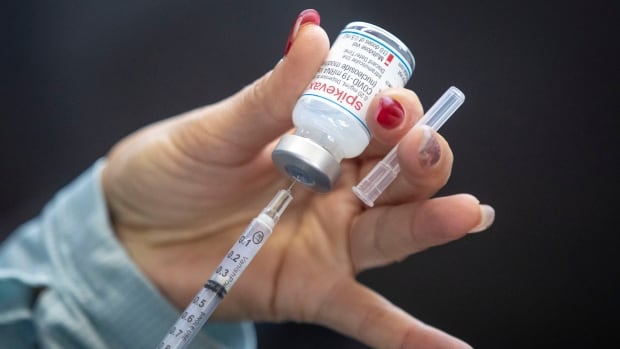 As COVID-19 restrictions continue to loosen across Ontario, some say public health officials failed to stress the importance of third doses.

Only 47.3 per cent of people have received a third dose, according to Public Health Ontario data up to Feb. 27. That’s compared to 81 per cent who’ve had two doses, or a gap of about 5.5 million people.

Ontario lifted the vaccine mandate at the beginning of the month and could lift the mask mandate by the end of March as the number of hospitalizations has continued a mostly downward trend since mid-January.

“We still have a possibility to mess this up if we just move too fast,” said Dr. Peter Jüni, leader of Ontario’s COVID-19 Science Advisory Table.

The percentage of people with a third dose increases with age, with more than 80 per cent of people over the age of 70 and more than half of those between the ages of 40 and 69 having a third dose, PHO said.

In Ottawa, 61 per cent of people 12 and older have a third dose. The only health units with higher rates are in Leeds, Grenville and Lanark counties and the Kingston area.

But that number is not rising rapidly. Only around 10,000 third doses are given out each day across the province, Jüni said, adding more people per day — an estimated 15,000 to 20,000 — are instead acquiring less effective, piecemeal immunity by contracting the Omicron variant.

Dr. Peter Jüni, who leads Ontario’s COVID-19 Science Advisory Table, says immunity to COVID-19 from natural infection and vaccinations will make it harder for the virus to spread, even as restrictions are slowly loosened. 1:43

“I think that as public health, we dropped the ball on this one,” said Dr. Doug Manuel, senior scientist at The Ottawa Hospital.

“I’m concerned that we didn’t communicate this well.”

He compared COVID vaccinations to having to continuously fill up your vehicle’s gas tank: it’s only full when you leave the gas station — or vaccine clinic.

Manuel said after two years, fatigue has taken over for both the public and health-care workers causing a drop in people’s motivation to get vaccinated, despite being told three doses provides better protection against Omicron.

What had been one of the most effective behaviour-modifying tactics, vaccine passports, also stopped working, he said.

“There’s less receptivity for them especially at this stage of the pandemic.”

Ottawa Public Health acknowledged in a statement more needs to be done to “stress the effectiveness of three doses against Omicron” and said it has been working with community groups to remove barriers for people trying to get a vaccine.

In Renfrew County, the average third dose numbers are comparable to the rest of the province, but sit around 30 per cent for those between the ages of 18 and 50 — a figure the area’s medical officer of health, Dr. Robert Cushman, called “terrible.”

“This is sad because this is a failure on the part of public health, on the part of the community,” he said, adding lifting restrictions and removal of the vaccine passport, along with the unwillingness to make them three-dose passports hasn’t helped.

“This has sort of aided and abetted … poor compliance, low enthusiasm for getting a third shot and that’s really too bad.”

Cushman says it will come down to timing and a revitalizing of efforts around messaging to increase vaccine uptake if and when another variant of concern arrives.

He also suggested looking at grouping COVID-19 vaccinations with influenza ones in autumn.

“All around it’s going to be a slog and we just have to remind people and do our best and hopefully people take this to heart.”