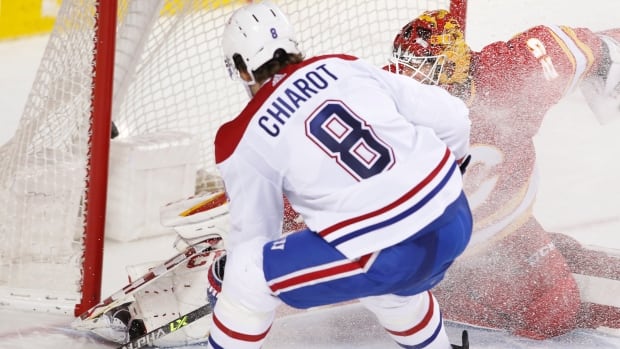 Ben Chiarot scored the overtime winner for the Montreal Canadiens in a 5-4 win over the host Calgary Flames on Thursday.

The Canadiens foiled the Flames in their bid to set a franchise record of 12 consecutive home wins at the Saddledome.

Chiarot scored his second of the game at 1:03 of OT.

Mike Hoffman had a goal and two assists for Montreal (14-34-7) at the bottom of the Atlantic Division.

Nick Suzuki had a goal and an assist and defenceman Jeff Petry also scored for the Canadiens.

Andrew Hammond made 30 saves for the win.

Andrew Mangiapane had goal and two assists for Calgary (32-14-7) atop the Pacific Division.

Blake Coleman, Johnny Gaudreau and Elias Lindholm also scored for the Flames, whose 11 straight home wins equalled a record established during the 2015-16 season.

Alberta’s lifting of COVID-19 restrictions on Tuesday meant no capacity limits or mask requirements Thursday at the Saddledome.

Game attendance had been capped at 50 per cent since Dec. 21. Masks were mandatory from the start of the season.

Ukraine and its struggle against invader Russia was acknowledged before the game, however, with Ukrainian colours flooding the ice during O Canada.

The visitors scored late in the second and twice in the third to lead 4-3 with 2:45 remaining in regulation.

But the Flames then swarmed the net with Markstrom pulled for an extra attacker. Lindholm produced the equalizer with 28 seconds remaining.

Hoffman beat Markstrom far side with a wrist shot from the face-off circle at 17:15 of the third period.

Chariot, who was hit in the face by a flying puck earlier in the game, scored on a wrist shot deflecting off Markstrom’s glove at 4:38 of the third.

The Canadiens pulled within one at 17:44 of the second during a two-man advantage when Suzuki squeezed a sharp-angled shot under Markstrom.

Montreal’s power play went 1-for-6 in the game, while Calgary was 0-for-3.

Mangiapane scored shorthanded for his fourth goal in as many games. He picked up a neutral zone turnover, drove into the offensive zone and beat Hammond with a backhand at 15:40 for a 3-1 lead.

Gaudreau put the Flames up 2-1 at 12:08 when Calgary corralled a poor clearing attempt by Hammond. Gaudreau skated the puck out from the boards and beat Hammond upstairs.

The Canadians drew even 1-1 with 26 seconds remaining in the first period. Ten seconds after a Calgary power play expired, Markstrom couldn’t secure a rebound off a Montreal rush and Petry put a sharp-angled shot over the prone Flames goalie.

The hosts led 1-0 at 11:06. Mangiapane skated the puck out of the corner, got Hammond stretching to his right and dished to a wide-open Coleman on Montreal’s doorstep.

Flames forward Tyler Toffolli faced his former club for the first time since the Canadiens traded him to Calgary for centre Tyler Pitlick, prospect Emil Heineman and a pair of draft picks Feb. 14.

The Flames are on the road Saturday against the Colorado Avalanche before back-to-back games at home starting Monday against the Edmonton Oilers and Washington Capitals.

The Canadiens continue their road trip West in Edmonton on Saturday and Vancouver next Wednesday.