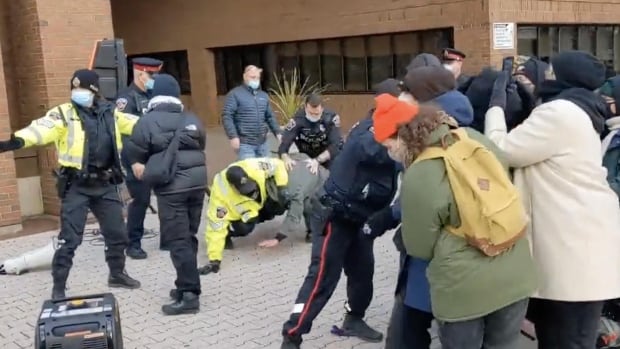 The charges against six activists arrested in connection to an encampment eviction at J.C. Beemer Park in November were withdrawn on Monday in a Hamilton court.

The six agreed to enter into peace bonds that prevent them from crossing police caution tape, interfering with police operations related to unhoused people, and participating in illegal or violent demonstrations.

They could face criminal charges if they breach those terms before the peace bond expires Nov. 24, exactly a year after the encampment eviction at J.C. Beemer.

The group’s lawyer, Dean Paquette, said the agreement with the Crown to withdraw the charges came “as a result of considerable discussion,” and that those who contravene the peace bond’s terms could be charged with breach of a court order.

The withdrawal comes after months of public support for the charges to be dropped by several organizations and community leaders, including the Hamilton Centre for Civic Inclusion, Afro Canadian Caribbean Association, the Hamilton and District Labour Council, Hamilton Centre MP Matthew Green, Beaches-East York MPP Rima Berns-McGown and others.

A statement issued Monday by Hamilton Encampment Support Network (HESN), the group that organized the J.C. Beemer demonstration, says the arrests and resulting court process have been “incredibly difficult for those involved.

“We were arrested, brutalized and threatened with significant amounts of jail time for supporting our unhoused neighbours,” says the statement on behalf of those who were initially charged including Jordan Grace, Rowa Mohamed, Sahra Soudi, Gregory Dongen, Sarah Jama and Ezra Amos.

“While we feel that dropping the charges was the best outcome, and couldn’t be happier with this win, it is disturbing to know that no plans for action or significant policy change have been taken by the City of Hamilton to stop encampment evictions.”

An update to Hamilton city councillors following a public works meeting on Jan. 26 showed 262 “encampment cleanups” were completed last year alone — 176 of which were done by the city and another 86 completed by a contractor.

A review of work orders showed those operations happened at 60 unique sites, the update stated, and that there were multiple visits made to the same sites.

The charges dropped Monday were related to an encampment eviction on Nov. 24 and a subsequent protest at the central police station on Nov. 26.

According to a statement of facts read in court, police were in the park Nov. 24 after a fire had engulfed two tents and damaged a hydro line. “Hydro crews were not able to assess and repair the damage if encampment residents remained in the park and the situation was deemed unsafe,” the statement said.

It said police created a taped-off area to allow hydro crews to work but then “demonstrators, including five of the six defendants, broke through the police tape, at which time the police immediately responded and physically took custody of two of the defendants restraining them, resulting in a physical encounter between police and the defendants, as well as other HESN activists. No party was seriously injured because of the altercation.”

“Each accused accepts responsibility for their actions.”

A sixth person was charged based on actions at a protest two days later, demanding the release of one of the Beemer Park defendants, at the police force’s central station. The statement of facts says protesters were ordered off police property.

“A physical altercation took place between the demonstrators and the police. A number of people… ran back onto the property, escalating the confrontation and eventually interacting physically with a police officer leading to Amos being grounded and arrested.”

The defendant arrested at the police station that day said Monday they were shocked to hear the agreed-upon statement of facts for the first time.

Amos later told CBC Hamilton that they don’t believe they crossed a police line or escalated the situation, and alleged that they were initially arrested mistaken for another protester.

They also alleged police choked them and slammed them to the ground when they were arrested. “My handcuffs were so tight, I still have scars on my wrist,” said Amos, who identifies as non-binary and uses the pronouns they/them.

Once inside the station, Amos alleges they were searched by six male officers with no female present, and were told their clothes would be cut off if they kept struggling. They said they were not given the option to specify their gender and were eventually put into a cell with men.

Amos says they agreed to the facts Monday “to keep the peace,” saying the process so far has already been “damaging on so many levels” — partially because the lack of gender sensitivity they have encountered.

“At pretty much every level of the system, my identity has been disregarded and oppressed,” said Amos, a visual artist who has since moved out of the city because of what happened and is currently crowd-funding for therapy. “I know that people expect [the dropping of charges] to be a celebration but I don’t feel this comes anywhere close.”

The Special Investigations Unit (SIU) investigated a separate reported injury related to the arrests but closed the case in January, saying it did not meet the criteria for a “serious injury” within the mandate of the SIU.

In an interview Monday afternoon with CBC Hamilton, police chief Frank Bergen said he encourages Amos to file a complaint with the Office of the Independent Police Review Director about their concerns with their arrest.

“That doesn’t seem to be consistent with what we know about that interaction,” he said, noting it is not a Hamilton police tactic to cut the clothes off someone who is being searched.

He said the force is constantly striving to do better in its interactions with gender diverse and trans people.

“That’s part of what we do every day when we look at our policies and procedures, that in fact we are capturing pronouns… We are absolutely current and continue to learn, to do better, with every interaction.”

As for the charges, Bergen said police had been working with the Crown to resolve the matter for some time.

“What people had to recognize right from the very beginning, this is up to the five or six people involved,” he said. “You can’t impose a resolution on people if they’re not willing to accept it. They took responsibility for their actions and that is part of the role.”

Charges ‘not in the public interest’: activist

The agreement to withdraw the charges came the same day HESN rallied supporters to try to stop what they said was an expected encampment eviction on Linden Street. Later in the day however, they said on Twitter that the tear-down had been called off.

It also followed months of campaigning for the charges to be dropped, by HESN and several other community organizations, in addition to calls for a judicial inquiry into police actions during the arrests and for an end to encampment evictions.

Jordan Grace, one of those arrested at the park, says he believes the charges were withdrawn at least partially because of the public support, and because “it was clearly not in the public interest to move forward with charges against us… The people who got arrested are people who are dedicated community members and volunteers. We were definitely victims of an overreaction by the police.”

He says he couldn’t help but compare his arrest with those last month of the anti-mandate convoy members in Ottawa, where some arrests occurred after weeks of occupying public space and complaints of noise and harassment.

He said the response of city council and police to homelessness is disingenuous and called their policies “inadequate and dysfunctional.”

The reason HESN takes the encampment issue so seriously, he said, is because many of its members have experienced poverty themselves.

“For us, it’s a life-or-death situation,” he said.