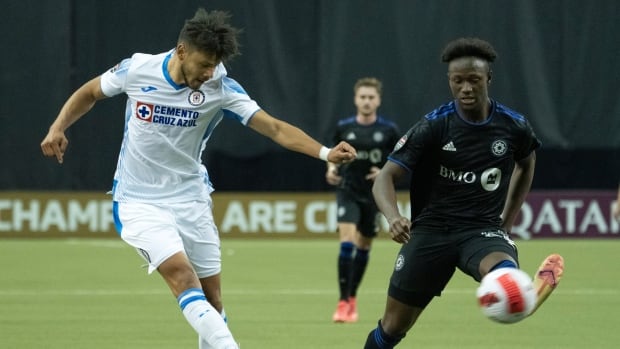 CF Montreal’s CONCACAF Champions League run ended Wednesday night as a 1-1 home draw against Cruz Azul saw them bow out of the tournament on aggregate.

Rudy Camacho scored for CF Montreal while Uriel Antuna was the lone goal-scorer for Cruz Azul who have qualified for their second consecutive Champions League semifinal.

CF Montreal had lost to Cruz Azul 1-0 in the first leg of the quarter-finals on March 9.

Montreal came out of the gate firing, showing an intensity that was sorely missed last Wednesday at Azteca Stadium with more shots on target in the first 30 seconds than in the entire first leg.

Cruz Azul beats CF Montreal 2-1 on aggregate in the quarter-finals of the CONCACAF Champions League. 1:24

It took 15 minutes for the first big chance of the game to manifest itself. After being played in alone, Santiago Gimenez forced a huge save from Sebastien Breza.

As Montreal continued to press and look for that all-important aggregate equalizer, they continued to run into a Cruz Azul back line that refused to give an inch.

The best chance of the half for Montreal came just a minute before halftime when Romell Quioto managed to connect with a cross but sent the close-range header wide.

Cruz Azul made Montreal pay for their lack of finish. Less than a minute later, Antuna found himself unmarked in the middle of the box. He made no mistake, giving Cruz Azul the lead and a crucial away goal after yet another defensive mix-up from Montreal.

Montreal started the second half the same way they started the first with substitute Kei Kamara missing three golden opportunities inside the first ten minutes.

It took another 20 for that pressure to materialize on the scoresheet as a quickly taken corner found the head of Camacho, reducing the aggregate gap to one goal.

With less than a minute left in added time, tempers began to flare as a scrum formed after several consecutive fouls on Cruz Azul players.

Montreal will now head to Mercedes-Benz Stadium to face Atlanta United as they continue their MLS campaign on March 19.