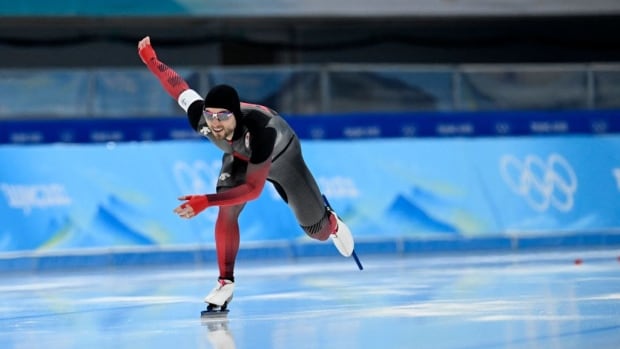 Canadian speed skater Laurent Dubreuil won the first men’s 500-metre sprint race Thursday at the speed skating world championships, and then added a third-place finish in the 1000-metre race to sit first overall going into Day 2 of the event in Hamar, Norway.

Thomas Krol of the Netherlands is in second place, highlighted by a leading time of 1:08.16 in the 1000m. His countrymate Kai Verbij put forth a more consistent performance to sit third, placing fourth in both the 500m and 1000m.

It was Dubreuil’s first race since he won the silver medal in the 1,000 metres last month at the Beijing Olympics.

In the sprint events, champions are decided after two races over 500 metres and two over 1,000m.

Laurent Dubreuil of Levis, Que., won the men’s 500-metre race and finished third in the 1,000-metre race to lead halfway through the ISU World Speed Skating Championships in Hamar, Norway. 2:45

Calgary native Maddison Pearman kicked off the entire competition skating alone in the 500m, ultimately placing 17th with a time of 40.08. She improved upon that finish in the 1000m by putting forth a time of 1:18.10, good for 11th and bringing her overall rank up to 13th.

Netherlands dominates the top of the women’s standings as well, with 1000m Olympic silver medallist Jutta Leerdam and Femke Kok claiming the top two spots. Vanessa Herzog of Austria is right behind in third.

For more coverage of this event, watch Road to the Olympic Games on Saturday at 3 p.m. ET, and on Sunday at 12:30 a.m. ET and 1 p.m. ET, and visit the following link for streaming Friday through Sunday, featuring sprint and allround combinations, and team sprint competitions.