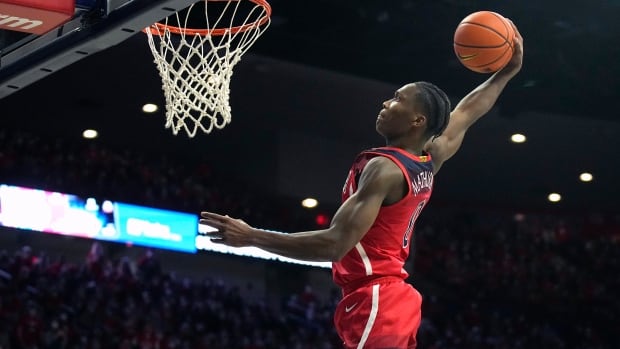 Bennedict Mathurin has led the way for a resurgent University of Arizona Wildcats men’s basketball team that is ready to hit the dance floor at the 2022 NCAA Tournament.

The 19-year-old sophomore guard from Montreal has had one of the finest campaigns in U.S. collegiate basketball this season, averaging 17.4 points and 5.6 rebounds per game while shooting 37.6 per cent from three-point range. He was named Pac-12 Player of the Year, the Pac-12 Tournament’s most outstanding player and was selected to a second-team All-American by The Associated Press.

Along with all the individual accolades, Mathurin has helped Arizona rise to the top again with the Wildcats winning both the Pac-12 regular-season and tournament titles, and earning a No. 1 seed in the South Region at the NCAA Tournament.

From his smooth jumper to his explosive athleticism, Mathurin has proven to have all the tools to dominate the college game, and has NBA talent evaluators drooling over his potential at the next level with just about every major mock draft projecting him as a top-10 pick.

But for all the success Mathurin has enjoyed this season, it hasn’t been an easy road for the 19-year-old.

At a young age, Mathurin dealt with the ultimate adversity. When he was 12 years old, Mathurin had to come to grips with the loss of his older brother, Dominque, who died in a bicycle accident at the age of 15.

The Mathurin family was, of course, devastated, but instead of allowing tragedy to define them, they used the incident as a means to grow and become stronger.

Bennedict and his older sister Jennifer turned to sports to help them cope.

Jennifer went on to play four seasons with the powerful North Carolina State women’s program and is currently an associate coach with the Bishop’s University women’s basketball team.

Growing up in Montreal with his sister as his role model, Mathurin played football and hockey, in addition to basketball. He claims he was actually a pretty good hockey player, but given his sister’s success with hoops, the choice was clear where he would focus his athletic endeavours.

He had a goal in mind to play NCAA basketball and, eventually, make it to the NBA.

At the start of his high school career, Mathurin was considered a four-star recruit but felt he wasn’t getting enough eyeballs on him, so he decided to try something no other Canadian had done before.

In 2018, Mathurin, made the bold decision to forego playing a traditional high school career, and instead play for the NBA Academy Latin America in Mexico, becoming the first Canadian to do so.

The NBA Academy is a year-round elite basketball development program that provides top high school-age prospects from outside the U.S. with a holistic approach to player development, focusing on health and wellness, character development and life skills, and gives prospects the opportunity to learn the game from coaches who the NBA hires with professional, collegiate and international coaching experience.

There are four NBA Academies spread out around the world in Australia, India, Senegal (which represents the African continent) and the Latin American academy in Mexico.

Mathurin said the two years he spent attending the academy was probably the best thing he could’ve done for his future basketball career.

“When [Mathurin] arrived here as a very young man, he was very shy, was not very open and it was hard for him to trust people until he figured out that the NBA Academy is all about helping student athletes,” said Mathurin’s NBA Academy coach Walter Roese. “He matured a lot and it was an unbelievable transformation from Day 1 to the day he departed.

“It took him a fair amount of time to sort of warm up to his teammates and coaches and to develop that trust,” added Chris Ebersole, NBA associate vice president in charge international basketball operations . “He’s still somewhat reserved, but he has this confidence and quiet leadership that he carries himself with that I think his teammates really respect, his coaches really value and, I think, his opponents probably fear.”

In his first year at Arizona in 2021, Mathurin was named to the Pac-12 All-Freshman team, but was still just scratching the surface of what was to come.

He could’ve declared for the NBA draft after his freshman year, but opted to return for his sophomore season. That decision resulted in his draft stock rising dramatically while also affording him an opportunity to take part in March Madness.

The Wildcats operated under a self-imposed post-season ban in 2021 amid an ongoing NCAA investigation into an FBI bribery scandal involving a former assistant coach and agent, meaning Mathurin missed playing in both the 2021 Pac-12 Tournament and the NCAA Tournament.

This year he’s helped lead the Wildcats to a No. 1 seed.

“I’m pretty excited,” Mathurin said. “It’s my first time playing in March Madness, so I’m looking forward to go as far as possible and to win the national championship.”

Mathurin headlines a deep group of 30 Canadians participating in the NCAA Tournament.

Mathurin shared the floor with many of these players on Canada’s bronze medal entry at the 2021 FIBA Under-19 World Cup in Latvia.

There’s a chance that Mathurin’s Wildcats could actually face Samuel, a fellow Montreal hooper, and Seton Hall in the tournament’s Round of 32.