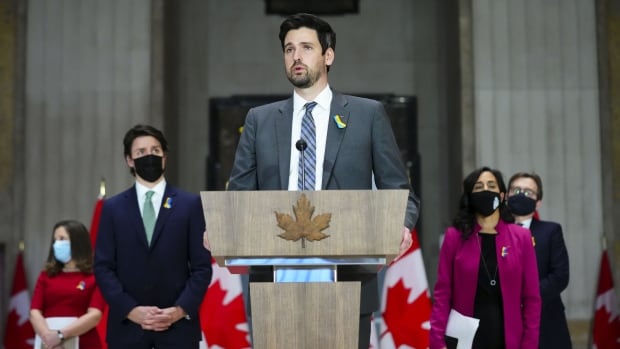 Immigration Minister Sean Fraser announced Thursday the federal government has created two new pathways for Ukrainians fleeing their war-torn country to come to Canada — part of a plan to accept an “unlimited number” of people who want to leave.

To start, Fraser said his department has created a new visa category that will allow a limitless number of Ukrainians to come to Canada to live, work or study here for up to two years.

People accepted under the Canada Ukraine Authorization For Emergency Travel program will have an open work or study permit and employers will be free to hire as many Ukrainians as they want.

Fraser said the federal government is waiving most of the typical visa requirements but applicants will still need to supply biometrics and undergo a background screening process before leaving for Canada. The application process will open in two weeks’ time.

Fraser said the department is prepared for a possible influx of Ukrainians and there are biometric kits and personnel ready to assist would-be applicants at diplomatic posts in Warsaw, Vienna and Bucharest and at 30 other locations throughout Europe. Canada is also waiving application fees for all Ukrainians who want to avail themselves of this program.

Fraser also announced the government is introducing an “expedited path” to permanent residency for Ukrainians with family in Canada. The minister said a “wider circle of family members” will be able to sponsor Ukrainians who want to come to Canada on a more permanent basis.

Some critics, including NDP Leader Jagmeet Singh, have called on the government to drop the visa requirement altogether to allow all Ukrainians to travel to Canada unencumbered.

Canada announces new options for Ukrainians to come to Canada

Asked about the possibility of visa-free travel for Ukrainians, Fraser said that sort of change would require 12 to 14 weeks of work to implement because the department’s IT systems would need “certain renovations” and airlines would have to change their normal processes. He said the situation is urgent and there’s no time for a three-month delay.

Fraser also said it’s prudent to conduct background checks on all applicants to weed out any Russian collaborators. He said a blanket visa waiver would mean some people could “slip through the cracks,” including people aligned with Russia who have attacked Ukrainian forces in the breakaway regions of the Donbas.

The Ukrainian Canadian Congress said the new pathways will help some of the nearly one million people who’ve already fled the country.

“Canada, together with all civilized nations, is mobilizing in support of efforts to help these innocent people. Our community is grateful,” the group’s president, Alexandra Chyczij, said in a media statement.

“Russia is trying to destroy Ukrainian cities and towns from the air. These are crimes against humanity that are causing a humanitarian catastrophe not seen in Europe since World War II.”

As punishment for what Freeland called a “barbaric” invasion of Ukraine, Canada is slapping a steep 35 per cent tariff on all exports from both Russia and Belarus — a country that has been used as a staging ground by Russian troops. The change could effectively halt all trade between Canada and these former Soviet bloc countries.

Canada is also levying sanctions on two major Russian oil and gas producers, Rosneft and Gazprom. The move follows an earlier decision to halt all petroleum imports from Russia.

With the addition of these two major oil companies, Canada has now sanctioned more than 1,000 Russian individuals and entities.

WATCH: The refugee crisis at the Poland-Ukraine border is getting worse

A train station near the Poland-Ukraine border is the site of a growing humanitarian crisis as many Ukrainians arrive without money and an uncertain future ahead, something Canadian Foreign Affairs Minister Mélanie Joly witnessed first-hand. 2:16

Freeland said Canada and its G7 partners already have imposed the strongest sanctions ever inflicted on a major economy. She said “more will follow in the days to come” as Russian forces continue to bombard Ukrainian cities with rockets and missiles.

“We will do everything in our power to make sure President Putin and his accomplices pay the price of this grave historical mistake,” Freeland said. “We cannot allow him to succeed and we will not.”

The country’s central bank has hiked the benchmark interest rate to 20 per cent — a move that will obliterate Russian savings and push up the price of everything. The country’s stock exchange has been shuttered for four days.

Two major credit rating agencies, Moody’s and Fitch, have downgraded Russian government debt to junk status, which will make it increasingly difficult for Putin and his regime to borrow any money to fund its war machine. The country’s currency, the ruble, has been on a precipitous decline since the invasion and the resulting sanctions, dropping in value by some 30 per cent against the U.S. dollar.

“The economic costs of the Kremlin’s barbaric war machine are already high and they will continue to rise,” Freeland said. “I do want the Russian leadership to understand that we’re going to keep going. There is a tremendous willingness among the world’s democracies to just continue ratcheting up the pressure.”

At a separate announcement on support for small businesses, Prime Minister Justin Trudeau said the government is prepared to help any companies that experience disruption as a result of Canada’s aggressive economic actions against Russia.

While Canadian companies have relatively little exposure to the Russian economy — two-way trade plummeted after Putin’s seizure of Crimea from Ukraine in 2014 — there could be some fallout for some importers now faced with a maze of red tape and eye-popping sanctions on the goods they bring in from the region.

With oil out of the picture, Canada’s largest import from Russia is platinum.

In 2019, Canada’s largest exports to Russia were planes, helicopters and spacecraft, radioactive chemicals and animal feed. The recently announced ban on export permits could make it difficult for those goods to ever make it to their intended Russian recipients. Putin may also retaliate against countries that have levied sanctions on him and his country.

“Our approach on this has been to go as hard and as fast, as quickly as we could, in coordination with our allies around the world,” Trudeau said.

“Obviously, this may last some time and as we move forward in this situation we will take a look at how we can minimize the impacts on Canadians. But our priority right now is sending the strongest signal of condemnation and penalties to Putin and Russia that we possibly can.”

To help Ukrainians in the fight against Russian forces, Defence Minister Anita Anand announced Canada will provide more lethal aid to the country.

Anand said Canada is sending 4,500 M72 rocket launchers and 7,500 hand grenades drawn from existing Canadian Armed Forces (CAF) stockpiles. She said these supplies will be deployed “as quickly and as safely as possible.”

This shipment builds on a previous commitment to send Ukraine up to $10 million worth of lethal and non-lethal aid, including sniper rifles, carbines, pistols, body armour and 1.5 million rounds of ammunition.

Canada is also granting Ukraine some $1 million to purchase “high-resolution satellite imagery,” which will give Ukrainian forces the ability to monitor the movement of Russian forces as they continue their incursion.

“We are going to keep adding to the measures to support Ukraine sovereignty, security and territorial integrity. The brutality of what we’re seeing on our screens is angering everyone,” Anand said.

“A more violent conflict is not what Ukraine, Canada and the rest of the world wants or needs. We want peace.”

The CAF also has roughly 3,400 military personnel on “high readiness alert” for a possible deployment to the region to offer more protection to NATO countries that border Russia. Anand said NATO’s supreme allied commander in Europe will decide if those Canadian troops will be dropped into a country like Latvia in the coming weeks.

Canada already has troops on the ground as part of Operation Reassurance, which has placed CAF personnel in central and eastern Europe to carry out assurance and deterrence measures.