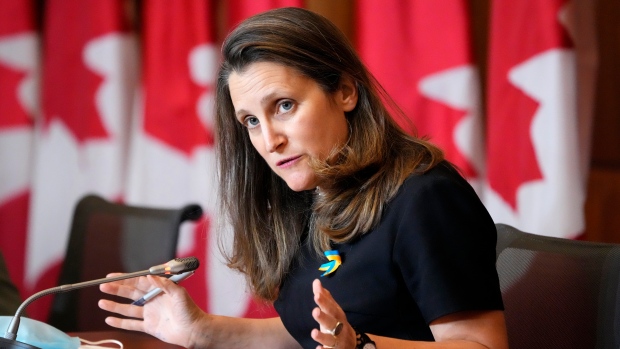 The Canadian government is taking major trade action against Russia, is sending Ukraine more lethal aid, and will be opening new ways for Ukrainians to seek refuge in this country.

For Ukrainians fleeing from the Russian-launched war, Canada is opening up two new immigration streams.

One will allow an unlimited number of Ukrainians to come to this country on a temporary basis with expedited emergency visas, and the other is a new family reunification pathway for those looking to stay permanently in Canada.

For those looking to come to Canada while the attack continues, this stream will allow Ukrainians to stay for up to two years. Most visa requirements will be waived, including fees, and in order to qualify individuals will need to complete a “simple” application form and provide biometrics for security and background screening.

Everyone who arrives under this new stream will also be eligible for a work permit or study permit that will allow them to take a job with any Canadian employer or enroll in an education program, said Minister of Immigration, Refugees and Citizenship Sean Fraser on Thursday, encouraging businesses to “step up” and hire those who arrive.

“Canada is ready to welcome Ukrainians fleeing Vladimir Putin’s war, and there is no limit to the number of applications that we are going to be willing to accept,” Fraser said.

For those looking to make Canada their home, the government is also introducing an expedited path to permanent residency for Ukrainians seeking to reunite with family members who are already in Canada, through a new family sponsorship program with the details to be finalized in collaboration with Ukrainian-Canadian community groups in the coming weeks.

“The reason for our commitment goes beyond the historic ties between Canada and Ukraine… I can’t help but think that centuries from now historians will be writing of the courage on display in Ukraine today,” Fraser said. “From the fearless leadership of President [Volodymyr] Zelensky, to the young fathers with tears in their eyes delivering their children to safety before they return to the frontlines… to the unarmed grandmothers confronting Russian soldiers.”

Canada is also revoking Russia and Belarus’ “most-favoured nation status” as trading partners, meaning they will be subjected to a 35 per cent tariff on their exports to Canada.

Canada is the first country to take this step, Deputy Prime Minister and Finance Minister Chrystia Freeland said Thursday, adding that the only other nation that Canada subjects to this high tariff and deprives of other associated benefits is North Korea.

“We are working closely with our partners and allies to encourage them to take the same step,” Freeland said.

Referencing the latest round of sanctions levied on 10 Russian executives, Freeland said that the total number of people and entities sanctioned by Canada since Russia’s occupation of Crimea in 2014, has now risen to more than 1,000.

“The G7 has already imposed the strongest sanctions ever inflicted on a major economy, on Russia, and more will follow in the days to come. The ruble has been down by as much as 30 per cent this week… The Russian stock market is closed today for the fourth consecutive day,” said the finance minister. “The economic costs of the Kremlin’s barbaric war are already high, and they will continue to rise.”

Defence Minister Anita Anand also announced Thursday that adding to their cadre of lethal aid shipments to Ukraine, the Canadian Armed Forces will be sending from their stockpile up to 4,500 rocket launchers, and up to 7,500 hand grenades.

“These weapons… will be transported to the region as quickly and safely as possible,” Anand said.

“As we see the horrific impacts of Putin’s aggression, we must continue to remember that our allies and partners are united, and that we are going to keep adding to the measures to support Ukraine’s sovereignty, security, and territorial integrity,” Anand said. Only Putin knows what Putin will do, and it is our job to do everything we can to protect as many lives as possible together with our NATO allies.”