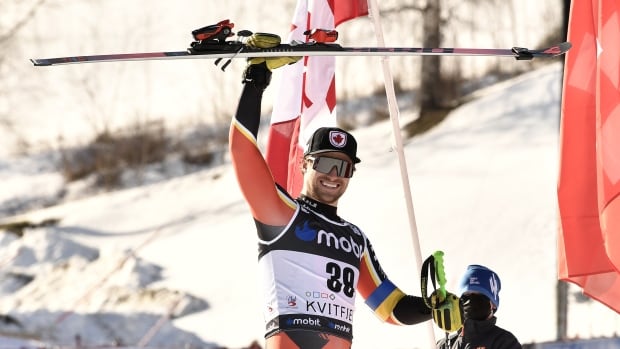 The North Vancouver native’s win is Canada’s second medal of the World Cup season, following Broderick Thompson’s super-G bronze in Beaver Creek in December. However, no Canadian had won a World Cup downhill race since Erik Guay won the Kvitfjell downhill in 2014.

Alexander missed all but one race in 2020-21, after suffering severe knee injuries in a crash in Val d’Isere, France. He returned to the World Cup in November, starting the races in Lake Louise, Alta.

After failing to make the Canadian team for last month’s Beijing Olympics, Alexander went to Kvitfjell to compete in three speed races on the second-tier European Cup circuit — and with success. He won a downhill, finished fifth in another and placed second in a super-G.

His only previous top 10 result in the World Cup came on the same course in Norway, when he finished 10th in the downhill two years ago.

Hintermann started 17th, after most pre-race favourites had done their runs, edging then-leader Matthias Mayer of Austria by 0.12 seconds for his second career victory.

Olympic downhill champion Beat Feuz, a teammate of Hintermann’s, was 0.19 behind in fourth, and Aleksander Aamodt Kilde was one-hundredth further back in fifth.

Alexander’s result meant that Kilde stayed at the top of the downhill season standings. With another downhill on Saturday and the season-ending event in France the only races remaining, the former overall champion from Norway leads Feuz by three points. Mayer trails by 28 in third.

Kilde remained the only racer to win multiple World Cup downhills this season. He has not won a downhill season title before. Feuz won the globe in each of the past four seasons.

When many believed the race was over, Alexander used his knowledge of the course to stage the upset.

Hintermann’s win followed downhill podiums in Italy in December, when he finished third in Val Gardena and Bormio in the span of 10 days, his only previous top three results in the discipline.

Friday’s win came more than five years after his first, when he stunned the field at a combined event in Wengen. Hintermann led the decisive downhill portion when heavy snowfall set in and robbed the favourites from any chance to beat his time.