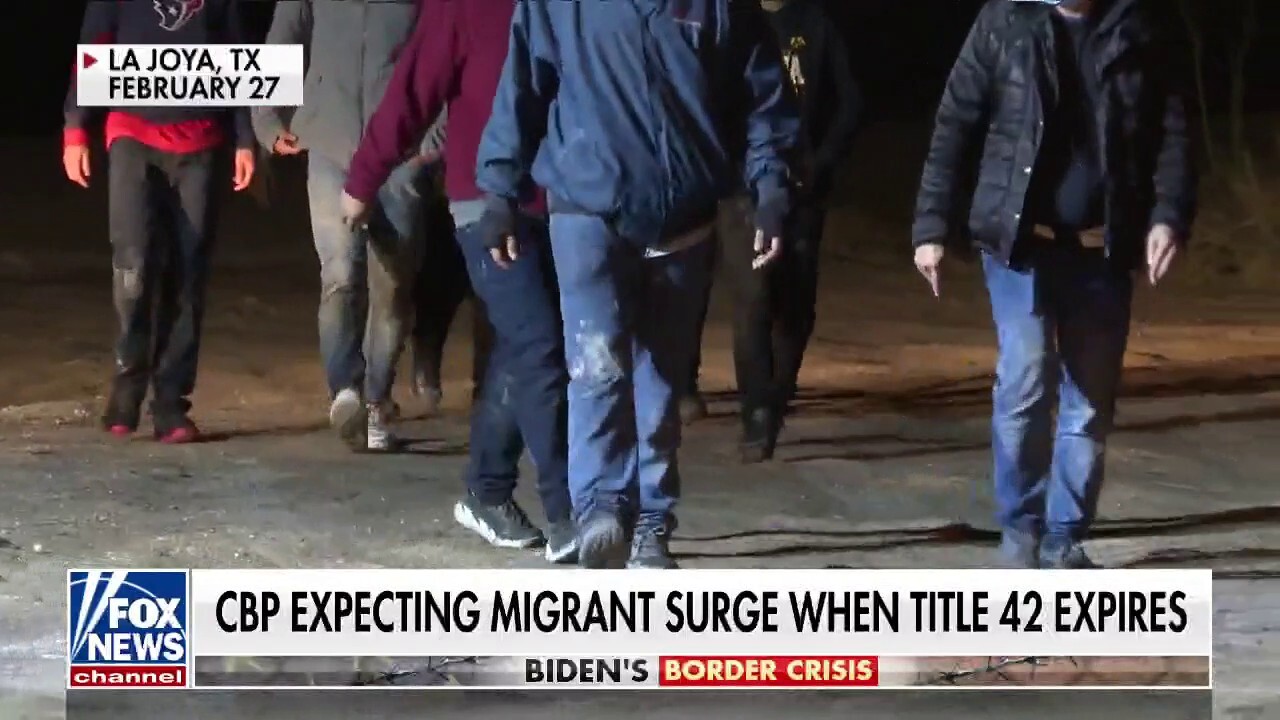 When it comes to border security, the Biden administration isn’t satisfied with just opening the floodgates — causing the single largest illegal immigration crisis in our history.

Now Biden is going a step further by seeming to remove the gates entirely.

BIDEN SAYS ‘THOUSANDS OF PEOPLE A DAY’ CROSSING US BORDER

CIUDAD ACUNA, MEXICO – SEPTEMBER 20: Mounted U.S. Border Patrol agents watch Haitian immigrants on the bank of the Rio Grande in Del Rio, Texas on September 20, 2021 as seen from Ciudad Acuna, Mexico. As U.S. immigration authorities began deporting immigrants back to Haiti from Del Rio, thousands more waited in a camp under an international bridge in Del Rio while others crossed the river back into Mexico to avoid deportation. (Photo by John Moore/Getty Images)
((Photo by John Moore/Getty Images))

DHS is set to implement a new rule substantially changing the role of asylum officers of the U.S. Citizens and Immigration Service (USCIS). Instead of simply determining credible fear which allows a claimant to appear before a judge, under the new rule asylum officers will now have the same authority as a judge. Secretary Mayorkas said: “Through this rule, we are building a more functional and sensible asylum system to ensure that individuals who are eligible will receive protection more swiftly, while those who are not eligible will be rapidly removed.”

While on the surface this might seem like a good idea for border security, it is not. In fact, and if statistics hold true, it will do the exact opposite. It will make the problem worse – much worse. It is a Trojan Horse.

In the asylum process there are two equally important components, USCIS and immigration judges.

USCIS is responsible for the intake and processing of asylum claims as well as making an initial determination as to the credibility of a person’s fear about returning to their country of origin. The judiciary reviews all pertinent evidence, hears the case by allowing the claimant to prove the claim, and makes a final determination based upon the law.

By removing immigration judges, the Administration is putting complete authority in the hands of a single department, DHS, with no review by the Department of Justice.

Complete power in a single organization is what leads to corruption as well as undue influence by the Executive Branch, no matter the current political party in power. The Founding Fathers understood this, which is why they implemented a system of checks and balances; and it has worked extremely well.

Furthermore, to determine whether this new rule proposed by the Biden Administration will work, consider the historical data.

At a recent bipartisan roundtable hosted by Senator Jon Cornyn and Representative Henry Cuellar at Texas A&M University, Rep. Cuellar said that only 14 percent of individuals who were found by USCIS to have a credible fear are ultimately granted asylum by an immigration judge. In other words, for every 100 applicants approved by USCIS, only 14 are found legitimate by an immigration judge.

DHS’ proposed new rule will not be a positive border security game changer. It will only encourage more illegal immigration.

When the word gets out that the asylum approval process is even easier to game than it ever has been, criminal cartels will be able to advertise their services more effectively around the world. Scary thought when you consider how effective the cartels are now.

This will lead to more vulnerable women and children putting themselves in the hands of the cartels and Illegal immigration will explode to even higher levels than the all-time highs we are now experiencing. That’s hard to imagine given the disaster we’ve been dealing with since Biden took office.

President Biden is fully aware of what will happen, or at least his handlers are. The solution is not more power to a single department riddled with liberal activism. Rather, the problem is solved by hiring more judges on a short-term basis, so the separation of powers continues while adjudicating claims in a timelier manner.

Simple. Yet for this administration, not so much.

The Biden administration created this crisis, and by all indications, including this proposed new rule, it is evident Biden is intent on allowing the crisis to continue. This is just another power grab and more bad governance by an out-of-touch career bureaucrat who has never lived in the real world and doesn’t face real world consequences for his poor decisions.

Although this rule change is bad for the reasons laid out above, there is a silver lining. I’m confident this new DHS rule will be challenged in court. I’m also confident it will be overturned.

Again, the solution is simple: hire more immigration judges on a short-term basis. That shouldn’t be too tough an assignment for a lifelong big spending, big government liberal.

The American public wants this administration to do its job. It needs to get this border catastrophe cleaned up. It created it!