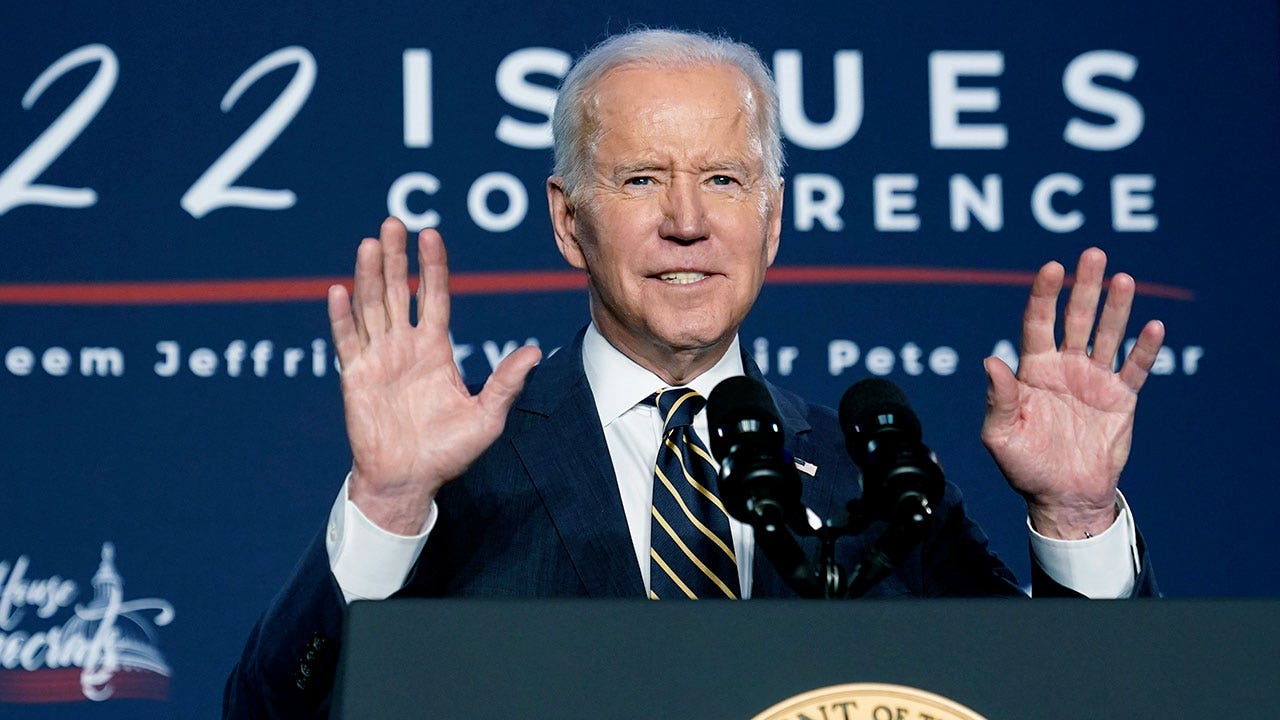 Green groups are celebrating the president’s comments last week that clean energy is the answer to ending the country’s reliance on foreign oil after he banned imports of Russian oil and gas in an effort to weaken Putin.

BIDEN ‘DOES NOT CARE’ ABOUT SMALL-TOWN AMERICA, SOUTH DAKOTANS SAY: ‘IF HE DID CARE, KEYSTONE WOULD BE GOING’

Biden said Russia’s war against Ukraine and its effects on global oil markets “should motivate us to accelerate a transition to clean energy.”

But while progressive groups like the Sunrise Movement have looked at the current crisis as an opportunity to move towards ending America’s reliance on fossil fuels, Republicans say it’s those very same policies that created the crisis in the first place.

“The world cannot rely solely on renewable energy like wind and solar at this point and time – that’s a fact the White House can’t understand,” Rep. Fred Upton, R-Mich., who serves on the House Energy and Commerce Committee, told Fox News Digital. “It’s clear that the US could have easily provided an alternative to Russian energy to our allies and taken away the Kremlin’s ‘ace’ had this administration not bent to the whims of the progressive Left and deserted an effective all-of-the-above energy strategy.”

“There is no denying that abandoning traditional fuel sources and failing to export LNG to our allies, per the Left’s climate agenda, created the perfect storm for Putin to take advantage of,” he added.

“I’m not opposed to clean energy, but the real solution to America’s energy independence is right under our feet, if we’re willing to look,” Thune told Fox News Digital. “We need a federal government that understands the importance of responsible domestic oil and gas development as the foundation of an all-of-the-above energy strategy – a strategy that also includes biofuels, nuclear, and renewables.”

“America can once again achieve energy independence, and we must,” he said. “As we’re seeing here and around the globe, energy security is also a matter of national security.”

Republicans argue that Biden’s axing of the Keystone XL pipeline and pausing of new federal oil drilling prevented America from remaining energy independent. Lawmakers in Biden’s own party also criticized him in May after he lifted sanctions on the company behind Russia’s Nord Stream 2 gas pipeline.

Critics say the country’s continued reliance on foreign adversaries like Russia for oil and gas imports gave Putin more leverage in his calculus to invade Ukraine.

House Minority Whip Steve Scalise, R-La., who also sits on the House Energy and Commerce Committee, wrote in a piece for Fox News Digital on Monday that Biden “has played into Putin’s hands by ending American energy independence and renouncing U.S. oil and gas resources.”

U.S. Rep. Steve Scalise (R-LA) delivers remarks during a Republican-led forum on the origins of the COVID-19 virus at the U.S. Capitol on June 29, 2021, in Washington, DC.
(Kevin Dietsch/Getty Images)

“Europe did not become energy-dependent on Russia overnight. Putin’s barbaric attacks on Ukraine can be traced to Europe’s scorn for fossil fuels and nuclear power,” Scalise wrote. “Through his efforts to make the United States more like Europe, President Biden has ensured that European countries cannot turn to our abundant resources to drive down natural gas prices and cut free from Russian energy.”

“While the U.S. could meet all of Europe’s energy needs, Europe receives nearly 40% of its natural gas from Russia,” he continued. “Without alternative energy suppliers, European families will suffer from over-reliance on Russia because of European leaders’ shortsighted Green New Deal policies.”

“President Biden’s disastrous leadership has crippled the United States’ power and influence on the world stage,” he added. “Sadly, we are seeing now how the Biden administration’s far-left energy policies have made Russia richer and emboldened Vladimir Putin.”

Sen. Tim Scott, R-S.C., made similar statements in a recent piece for Fox News Digital, arguing that “simultaneously blocking the U.S. pipeline and green-lighting Russia’s pipeline sent the message that American security would be sacrificed in order to appease European leaders and environmental extremists.”

“The final sticking point is Nord Stream 2,” Sen. John Barrasso, R-Wyo., ranking member of the Energy and Natural Resources Committee, told Fox News in January. “Germany saying they’re delaying the approval of the pipeline for the next six months. I want to permanently stop that pipeline. You know that Vladimir Putin very effectively uses energy as a weapon. He uses it against other countries. He uses it to fund his military.”

“And Joe Biden has played right into his hands by killing the Keystone XL pipeline in this country and making it harder for us to use the energy we have in America right now,” he said.

Biden dragged his feet on announcing a ban on Russian oil and gas imports on March 8 after facing pressure from his own party. Gas prices were already smashing records and bringing down his approval ratings well before Russian forces attacked Ukraine, but the war accelerated the rise.

President Joe Biden delivers his first State of the Union address to a joint session of Congress at the Capitol, Tuesday, March 1, 2022, in Washington.
(Jim Lo Scalzo/Pool via AP)

The Biden administration had previously released 50 million barrels of oil from the National Strategic Reserve on Nov. 23, 2021, in an attempt to alleviate growing pain at the pump. The administration released another 30 million barrels from the reserve this month, but the prices continued to rise. After he announced a ban on Russian oil, Biden warned Americans that there was “not much” he could do about the rising prices.

On Friday, Biden told House Democrats that the record gas prices and inflation, which hit a 40-year high last month, are not his fault.

“Make no mistake, inflation’s largely the fault of Putin,” he said. “I love, you know, the Republicans saying it’s Biden’s gas pipeline, Biden’s said he’s going to stop the Keystone Pipeline and I did and that’s the reason prices went up. Folks let’s get something straight here, the Keystone Pipeline was two years away and had been 2 percent finished. Give me a break.”