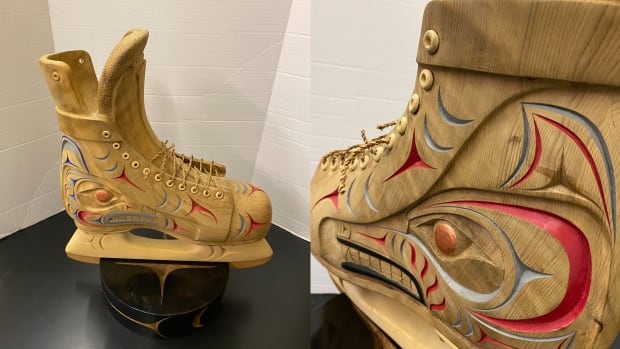 A B.C. man is auctioning off a unique wood carving of a hockey skate to raise funds for B.C. Children’s Hospital.

Dan Wickstrom says he had been inspired to organize a fundraiser for a while to honour the health-care workers who helped save his son’s life.

Wickstrom commissioned artist Ryan Pakkalen to make a wood carving of a skate mounted on a puck, as well as Musqueam artist Chris Sparrow, who added Coast Salish elements. The piece stands 24 inches tall, and is 18 inches long.

Jeff Schwartz of the reality TV show The Liquidator will be auctioning off the item, with all proceeds going to B.C. Children’s Hospital.

Wickstrom says his son, Dayton, spent three days in hospital after falling into a coma back in 2016.

2:13A local father is raising money for BC Children’s Hospital

A local dad is auctioning a carved and painted wooden hockey skate to raise money for BC Children’s Hospital. Dan Wickstrom decided to commission the piece to honour the healthcare workers, who saved his son Dayton’s life, back in 2016. 2:13

“He had minimal brain activity and we were told to expect maybe the worst,” he said.

He says hospital staff not only took care of Dayton, who was one-and-a-half at the time, but also him and his wife during a time that could only be described as a parent’s worst nightmare.

While Dayton was in intensive care, nurses gave Wickstrom a room to sleep in and brought a twin bed to the ICU so his wife could co-sleep with their son, as he was non-responsive and had almost no brain activity.

Then Dayton made a full recovery.

“He’s alive and we’re sitting here talking about the good times, not the stuff that could have happened,” he said. “I literally owe that to B.C. Children’s Hospital.”

A viewing of the carving will take place Saturday from 10 a.m. to 4 p.m. PT, at Direct Liquidation on 2306 Madison Ave. in Burnaby. The auction starts at 10 a.m. PT Sunday.

Wickstrom’s fundraiser has been approved and endorsed by the B.C. Children’s Hospital Foundation.