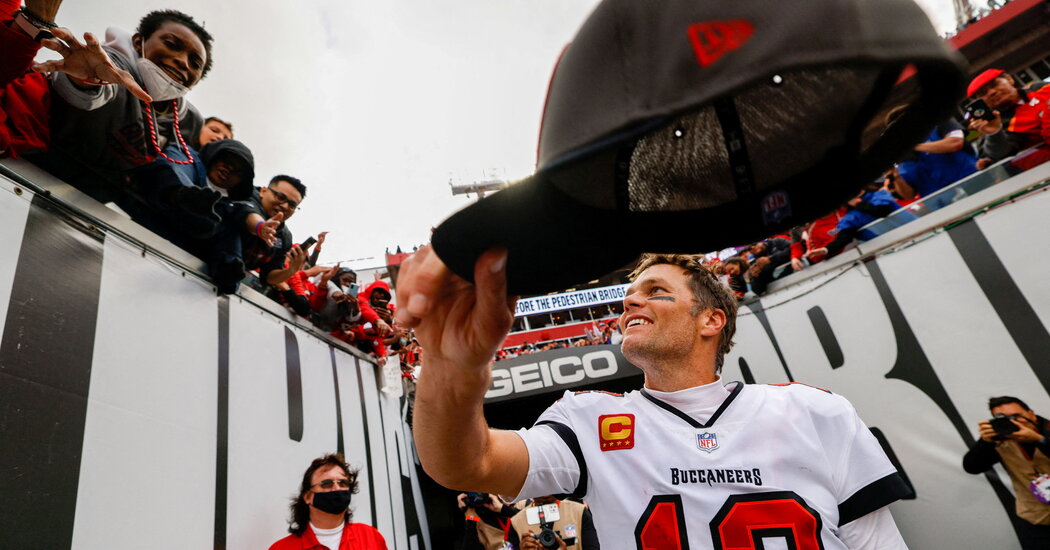 The Tampa Bay Buccaneers’ website on Monday morning said it all.

“Tom Brady is Back!” it read in bold black letters. “Join the Waitlist for 2022 Season Tickets.”

The headline, of course, referred to Brady’s decision to unretire. Less than two months after he ended his 22-season N.F.L. career, Brady, 44, reversed course Sunday night by announcing on social media that he would return to the league and to Tampa Bay.

“I’ve realized my place is still on the field and not in the stands,” he wrote.

After Brady’s first announcement, with its franchise centerpiece departed, Tampa Bay looked like it would need to rebuild to stand a chance of competing. With Brady, the quarterback of a record seven Super Bowl-winning teams, the Buccaneers are instead in prime position to compete for what would be their second championship in three seasons.

His decision followed news last week that Aaron Rodgers, the league’s reigning most valuable player, agreed to stay with the Green Bay Packers, seemingly ending a highly publicized rift between Rodgers and the team’s front office. The Denver Broncos also planned to trade for Russell Wilson, a nine-time Pro Bowl selection who spent 10 seasons with the Seattle Seahawks.

A good quarterback has always been the staple of a healthy franchise, but those three cornerstones helped define the 2010s in the league through stellar play for their organizations and continued to do so in the 2020s. But the tumult that has surrounded Rodgers and Wilson’s tenures in recent years, and the seismic impact of Brady’s decisions, spotlights the power those elite passers hold over their own franchises and around the N.F.L.

“There’s a difference between Tom Brady and Aaron Rodgers and Russell Wilson and the vast majority of other quarterbacks in the league,” said Bill Polian, the former general manager of the Buffalo Bills and Indianapolis Colts who was inducted into the Pro Football Hall of Fame in 2015. “Not all quarterbacks are created equal.”

Below is a look at how each of these linchpins of the N.F.L. should alter the landscape of the league.

Tom Brady’s comeback is a windfall for the league.

Tom Brady’s return should be a boon for the N.F.L., and the early statistics have already hinted at it. His jersey was the top seller among N.F.L. fans during the 2021 regular season, according to Fanatics, and within a day of his return announcement Brady-related merchandise bested that of all athletes in Fanatics’s network, according to the online sport retailer.

His return made Brady the logical focal point of the Buccaneers’ pitch to prospective season-ticket buyers who may have doubted the team’s playoff chances behind Kyle Trask or Blaine Gabbert, the team’s two backup passers, and a sign they would not need a total rebuild to compete for their second Super Bowl title since 2020.

The N.F.L.’s schedule-makers also likely viewed the news as a welcome surprise. The process of building out the regular season schedule begins in January, and based on conference rotations, 2022 will already pit Tampa Bay against the Los Angeles Rams, the Packers and against Patrick Mahomes and Kansas City in a Super Bowl LV rematch. The Buccaneers are also slated to play a game in Germany in the 2022 season.

An N.F.L. spokesman declined to comment on marquee games, but Polian said he believed it was inevitable that the Buccaneers might feature prominently in night games during the 2022 season. “I don’t think the schedule is nearly complete or finished, so they’ll just re-juggle the prime time games the Bucs are in, which will be many,” he said.

But Brady’s comeback hasn’t been a windfall for everyone: An unnamed fan, who declined to be interviewed, paid over $500,000 for the ball thrown in what had been Brady’s final touchdown pass, a 55-yarder to Mike Evans late in the fourth quarter of the Buccaneers’ divisional-round playoff loss to the Rams in January. The gavel fell on the auction on Sunday. Hours later, the memorabilia lost its distinction, assuming Brady throws more touchdowns.

For the first time in two off-seasons, the Packers, one of the league’s oldest and most-storied franchises, can divert attention to other matters rather than wondering about the temperament of their star quarterback.

Rodgers, the reigning winner of back-to-back Most Valuable Player Awards, had engaged in a yearlong saga with Green Bay over his future there before announcing on social media last week that he would return to the team for the 2022 season.

Rodgers, 38, whom the Packers drafted in the first round in 2005, publicly bickered with General Manager Brian Gutekunst and others in the team’s front office over a list of grievances. They included, Rodgers said, the organization not including him in managerial decisions, his perceived mistreatment from the Packers toward former teammates and his not being utilized to recruit free agents.

Rodgers led the Packers to a 13-4 season in 2021, and their relationship improved even as chaos from Rodgers’s becoming a cultural lightning rod over his coronavirus vaccination status ensued off the field. But it ended in disappointment in the divisional round of the playoffs when the Packers lost, 13-10, to the San Francisco 49ers.

Rodgers’s return was the first chess piece to the team’s off-season plan. Green Bay enters the free agency period with salary cap concerns, but Rodgers’s undisclosed contract renegotiation is expected to free some space for the moves Gutekunst will have to make to re-sign key players. The star receiver Davante Adams said this week that he would not play under the franchise tag, and linebacker Preston Smith signed a four-year extension reportedly worth $52.5 million.

Rodgers’s decision, like Brady’s, maintains the balance of power in the N.F.C. as the Buccaneers and Packers attempt to challenge the Rams’ supremacy. With the two quarterbacks returning and the current rosters as is, their teams are the betting favorites to win the conference, according to Caesars Sportsbook. If Rodgers is involved in luring more talent to Green Bay, the Packers’ odds could lift even more.

Russell Wilson’s fresh start in Denver comes at an important moment for the Broncos.

After 10 years in Seattle, Russell Wilson will decamp to Denver to supplant the Broncos’ rotating cast of quarterbacks.

It’ll be a fresh start for Wilson, who had publicly voiced his frustrations with Seahawks executives last off-season over his desire to be involved more in personnel decisions. Behind a subpar offensive line, Wilson took plenty of sacks, and had seen most of his teammates from Seattle’s back-to-back Super Bowl appearances in the 2013 and 2014 seasons depart without upgraded replacements.

Wilson missed three games last season because of a finger injury, and Seattle endured its first losing season since his arrival, compelling both sides to make a change.

Enter the Broncos, who have failed to find a long-term successor since Peyton Manning’s retirement and have started 11 quarterbacks since 2016. The Denver franchise is for sale this off-season, and should get a jolt of new life from changes around the organization, which is expected to lobby for a new stadium in the coming years.

Denver’s excellent receivers, plus new head coach, Nathaniel Hackett, formerly the Packers’ offensive coordinator, had compelled rumors that the Broncos would be Rodgers’s top suitor this off-season. Instead, wideouts Jerry Jeudy and Courtland Sutton should benefit from Wilson’s accuracy and ability to buy his targets time to get open downfield.

They should help invigorate the A.F.C. West race, where the Chargers have added pass rusher Khalil Mack to an explosive defense, and where Kansas City’s offense still sets the tempo.