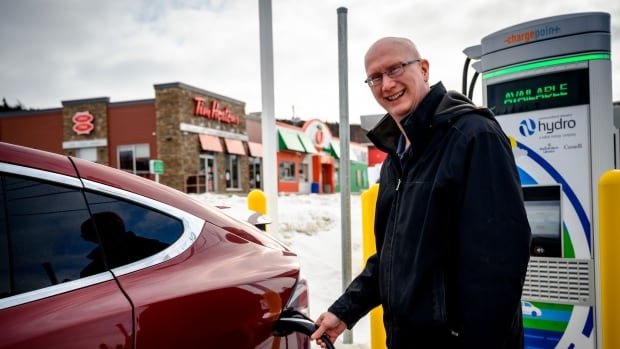 As costs for transportation fuel continue to rise, owners of electric vehicles (EVs) say now is the time to consider ditching gas-powered vehicles for good.

On Friday, the province’s Public Utilities Board posted record-high prices for gasoline and diesel, among other fuels.

Currently, the price-per-litre for regular unleaded self-serve is above $1.90 across the island In Ramea, Churchill Falls and Change Islands, that price topped $2.

But despite being insulated from rising costs for transportation fuel, EV advocate and co-founder of Drive Electric NL Jon Seary says now is not a time to gloat: “It is a time to step back and make some serious plans,” he said.

Fuel up on savings

Joe Butler, who co-founded Drive Electric NL with Seary, says cost stability is one of the main reasons he’s sworn by EVs for the past six years.

“I can predict roughly what my fuel will be,” he said. “And currently it’s probably one fifth or one sixth of the cost if I had gasoline for the equivalent car.”

Butler said while the sticker price may be higher for EVs, cheaper options exist: Each of the three he’s driven, including his current Tesla Model 3, were all purchased second-hand.

“Look at your car payments and your fuel bills together,” Butler said. “The car payments are a little higher, but your fuel cost is so much lower. Their overall cost per month is lower.”

From long-distance trips to pulling trailers, Seary has done it all with his EV.

For him, the benefits of EVs are as much environmental as economical, and the drawbacks are non-existant.

“[EVs] use an energy product that we produce right here and avoid importing a fossil fuel into the province and watching that money go out of the province,” he said.

While he’d choose an EV any day, Seary said moving away from gas-powered cars doesn’t mean the province has to ditch the oil and gas industry completely.

“I don’t see the adoption of electric vehicles having to compete against the validity of the oil and gas industry,” he said.

“We will always have a need for hydrocarbons. It’s silly to burn them, and it’s certainly wasteful just to burn them just for day-to-day commuting that we could do very easily with electric.”

Nothing to fear: Brake

“I don’t need to worry about potentially ballooning maintenance costs,” he said. “So that’s been a big benefit for me.”

Brake said the fear of the unknown kept him from going electric for a long time, but with more and more EVs on the road, that’s less of an issue now.

“People who are driving gas cars now and are worried about the future will know that they do have a realistic alternative now.”