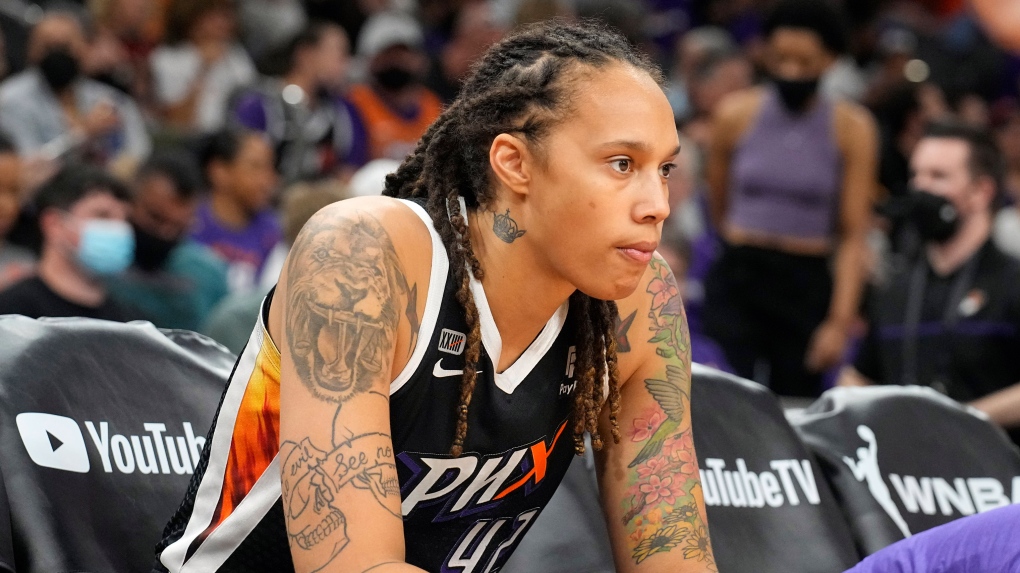 The arrest of two-time U.S. Olympic basketball gold medalist Brittney Griner has left supporters anxious about her well-being and fearful that she might become a political pawn.


Russian authorities said Griner had cannabis oil in her luggage and accused her of smuggling significant amounts of a narcotic substance — an offense punishable by up to 10 years in prison.


It’s still not clear exactly when Griner was arrested last month, or where she’s being detained now.


But escalating tensions between the U.S. and Russia over Russia’s invasion of Ukraine has stoked concerns that getting Griner out of Russia will be “very difficult.”


‘SHE’S BEEN THERE FOR QUITE SOME TIME’


Adaora Elonu, a former WBNA player who has also played in Russia, said she was “extremely worried” about Griner.


“Right now, I’m just very, very concerned — also knowing that she’s been there for quite some time,” Elonu told CNN on Tuesday.


She described feeling detached from much of the world while living in Russia. “Being in Russia, I was kind of in a bubble,” Elonu said.


“But once things started escalating, my agent was definitely pushing for me to get out. And I’m glad I listened to his advice and got out.”


‘THERE ARE NO WORDS TO EXPRESS THIS PAIN’


Griner’s whereabouts aren’t publicly known. CNN has reached out to the Russian Foreign Ministry for comment but has not heard back.


A member of Russia’s Federal Customs Service described the charge against Griner to Russia 24, the country’s main state-owned news channel.


“A criminal case has been opened against an American citizen under section 2 of 229 YK RF (Russian law) for smuggling of a significant amount of drugs,” Irina Begisheva of the Main Directorate for the Fight Against Smuggling of the Federal Customs Service told Russia 24.


“People say ‘stay busy.’ Yet, there’s not a task in this world that could keep any of us from worrying about you. My heart, our hearts, are all skipping beats everyday that goes by.” Cherelle Griner posted Monday.


“There are no words to express this pain. I’m hurting, we’re hurting.”


Over the weekend, she thanked supporters and asked for privacy “as we continue to work on getting my wife home safely.”


But a member of the U.S. House Armed Services Committee said “it’s going to be very difficult” to get Griner out of Russia.


“Our diplomatic relationships with Russia are nonexistent at the moment,” Democratic Rep. John Garamendi of California told CNN on Monday.


“Perhaps during the various negotiations that may take place, she might be able to be one of the solutions. I don’t know.”


He also noted that “Russia has some very, very strict LGBT rules and laws” — though it’s not clear whether those rules and laws might impact Griner’s case. Russia has passed LGBTQ-related legislation and outlawed the “propaganda of nontraditional sexual relations around minors.”


“My biggest fear is that … she will become a political pawn,” Jackson told CNN.


But the Biden administration is working on trying to get Griner out of Russia, members of the Congressional Black Caucus said after meeting with President Joe Biden on Monday.


Rep. Sheila Jackson Lee, who represents Griner’s hometown of Houston, said she raised the issue of Griner’s detainment and the “need for her to be immediately released and for her to receive the help of the United States to demand and facilitate that release,” in that meeting with the President, according to a statement Tuesday.


Griner has spent her entire WNBA career with the Phoenix Mercury and won the league’s championship in 2014. The WNBA has confirmed that all other league players have departed Russia and Ukraine.


Like many other WNBA players, Griner plays overseas in the offseason where salaries can be much higher than what female professional basketball players are paid in the U.S.


She won the EuroLeague Women championship last year with Russian club UMMC Ekaterinburg, where she has played since 2015 during her offseasons.


Fans around the world have called for Griner’s release, with more than 34,000 people signing the “Secure Brittney Griner’s Swift and Safe Return to the U.S.” petition on Change.org as of Tuesday.