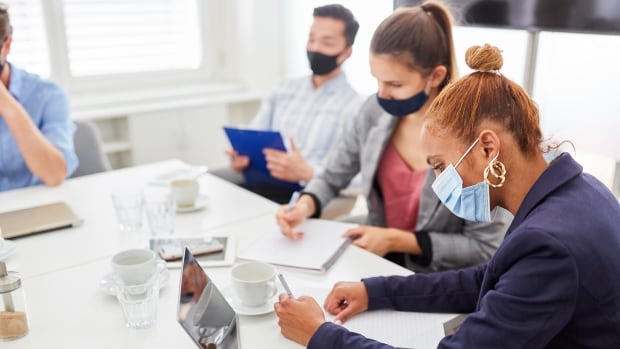 As pandemic restrictions ease, more employees are returning to work in person, causing anxiety about discrimination for some.

Working from home meant fewer in-person interactions with co-workers, so fewer chances for microaggressions such as being confused for another BIPOC co-worker by a white manager, being scrutinized by security or having your name constantly mispronounced.

Stephanie Yung, a creative director with Toronto firm Zulu Alpha Kilo, has developed a new tool to educate workers and combat those microaggressions.

It’s called The Micropedia of Microaggressions, an online encyclopedia of everyday snubs and insults that marginalized groups face. They’re often subtle comments or actions that come from implicit bias or stereotypes.

“How can we change something that we don’t know?” said Yung. She’s faced microaggressions herself, including being asked where she’s really from or being told to smile more.

“Research shows that while less obvious than overt forms of discrimination, [microaggressions] really take a significant toll both mentally and physically,” said Yung. “The last three years has been really challenging for so many different reasons. And I feel like mental well-being is top of mind for everyone.”

The Black Business and Professional Association helped with the development of the tool, along with a number of other Canadian diversity and inclusion groups.

“I think this is an opportunity for corporate Canada to really look at the factors that impede and affect our employees and look at this tool as an opportunity to understand and learn behaviours that impact individuals, said association CEO Nadine Spencer.

Spencer said remote work was a break from microaggressions for some, but she is hearing from members that anxiety is emerging with discussions of in-person working returning.

“The fear now comes back and that lack of confidence now comes back to individuals who are going to be working in an environment where they might experience these microaggressions,” said Spencer.

WATCH | Black Business and Professional Association says some are anxious about returning to the office in-person:

Nadine Spencer, CEO of The Black Business and Professional Association, says microaggressions are harder to prove, so people end up second guessing themselves, which has a tremendous negative impact on individuals. 2:22

“While overall, Black Canadians are facing less racism at work, it is still an ugly reality for many,” said Rob Davis, chief inclusion and diversity officer with KPMG, which conducted the poll.

“Many are concerned that the downturn was driven less by changing perceptions and understanding and more by the fact that many Canadians have been working virtually during the last 18 months. They are worried about what will happen when they return to the office.”

New survey of Black Canadians about promises to address racism

“Data collection is a significant part. It helps us to track, record and ultimately drive actions towards how we can make different decisions.” said Tarisai Madambi, director of management consulting and co-chair of the Black Professionals Network with KPMG. 1:00

The findings come from a survey KPMG conducted between Dec. 22, 2021, and Jan. 6, 2022, of 1,006 Black Canadians about whether the promises made by Canadian employers to address systemic racism in the wake of the killing of George Floyd and the growth of the Black Lives Matter movement were making a difference.

The Diversity Institute at the Ted Rogers School of Management has been using The Micropedia in its work helping organizations become more inclusive and in unconscious bias training programs.

“The extent to which those commitments are being translated into actions, I think, varies quite considerably. So there’s  no doubt in my mind the first step is naming the problem,” said Wendy Cukier, academic director of the institute, which was consulted in the creation of the resource.

“I was doing a presentation recently where someone from my team posted it in the chat and several people jumped in and said, ‘It’s fantastic, you know, we’ve been using it.'”

Yung said the response has been “really unbelievable” and she’s received feedback like: “Can’t believe this doesn’t exist before, this is just so helpful to see. I didn’t know that that was a microaggression.”

Users can submit entries and since the launch in December 2021, submissions nearly doubled the total number of entries to 230.

The microaggressions are divided into nine categories such as race, gender and disability. A 10th category on body size is being added after feedback from users. So far, the site has had more than 29,000 unique visitors from more than 115 countries and 2.19 million impressions on social media, according to Zulu Alpha Kilo.

The project has received a positive response from a number of global diversity, equity and inclusions and human resources professionals from private sector businesses, government and not-for-profit organizations who have embraced and shared it, said Yung.

The Micropedia isn’t about judgment, but understanding that people can change when they know more, she said.

“This can really help us create a better environment that really starts to achieve … the diversity, equity and inclusion goals of many businesses and organizations.”