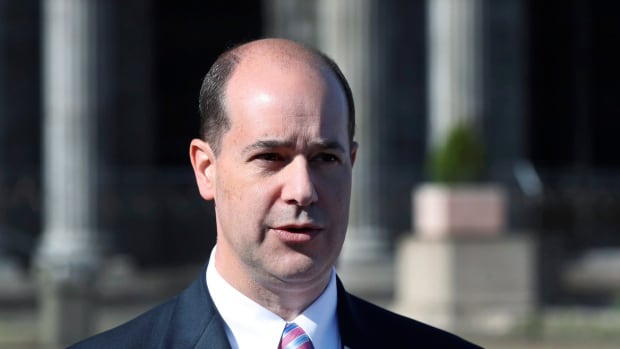 Ambassador Bridge owner Matthew Moroun says that in the wake of last month’s blockade of the vital trade artery it’s more important than ever to extend an “olive branch” and heal old rifts in Windsor, a city that’s wary of his business tactics after decades of dealing with his combative father, Manuel “Matty” Moroun.

The Michigan businessman, chairman of the Detroit International Bridge Company, which runs the Ambassador in tandem with the Canadian Transit Company, says he realizes there’s bad blood between his company and people on both sides of the U.S.-Canada border who didn’t like how his dad did business.

He says that after the protests against vaccine mandates that shut down the bridge for six days, delaying the transport of billions of dollars in goods, he wants to co-operate with Canadians to renovate the aging bridge and protect cross-border trade.

“Whatever olive branch I can extend, whatever hard work I can guarantee,” said Moroun in an interview with CBC News.

Moroun is a third-generation businessman, son of a self-made billionaire who started off pumping gas and cleaning buses at his own father’s Detroit gas stations and became a trucking tycoon and real estate investor who in 1979 bought the then 50-year-old privately built bridge, beating out famed investor Warren Buffett.

The married father of three, who lives in Grosse Pointe, Mich., declined to confirm whether he himself is a billionaire yet, but a tally of his shares in the various companies he owns suggests his net worth is close to that.

Moroun is defensive when it comes to the father he lost two years ago to congestive heart failure at the age of 93.

But it’s no secret that the elder Moroun made enemies on both sides of the border. For example, when he bought up homes in a historic area called Old Sandwich Towne at the foot of his bridge in Windsor in anticipation of needing the land for a second bridge span. The homes were left vacant and in disrepair for years as he awaited expansion approvals.

Moroun says his father was stuck in a “legal quagmire” over the project, unable to demolish the structures, and that he’s now trying to fix the issue and repair relationships.

But he has a long way to go to earn back locals’ trust.

Windsor West MP Brian Masse grew up in the city and crossed the Ambassador Bridge using a library card for identification as a kid.

He watched the “block busting” that still plagues the neighbourhoods along the Detroit River in the shadow of the Ambassador.

He hopes for a new era in the company’s relations with the city, but so far, he sees no evidence of it.

“It’s unfortunate. I hope there will be a better day and always remain open to that,” he said. “But the reality is what’s in front of us, and there’s a lot of work to do to repair the relationship.”

Masse says the elder Moroun’s long fight to delay construction of the new Gordie Howe International Bridge, in an effort to preserve the Ambassador’s near-monopoly over truck traffic, cost Canadians.

That protracted legal fight to stop the project failed in 2021, a year after the patriarch’s death, and the new bridge is set to open in 2024.

It’s been only two years since 48-year-old Moroun took the reins of his father’s trucking and logistics empire and vast property holdings, and, he says, he’s been working to smooth relationships by adopting a more collaborative, positive approach.

Masse points, for example, to Moroun’s so far unfulfilled promises to carry out beautification projects.

“They often leave equipment unattended and gravel falling onto public rights of way, with sidewalks, dirt and debris,” he said.

“Even the boarding-up material is actually rotting.”

While Masse is eager to see a shift in practices by the Ambassador’s owner, he’s straining to find evidence of it.

“If they wanted to repair the relationship, they could actually just fix their own property … right now, it’s the busiest international border crossing, and certainly, it’s not one that looks the part.”

Blockade was ‘not a good look’

Moroun says it’s time to let old feuds go and move forward with upgrades, and eventually, a replacement of the aging four-lane Ambassador with a new six-lane bridge.

He said it was hard to keep “cool” when protests closed the Ambassador Bridge in February — choking off Canada’s busiest cargo trade route with the U.S.

“What really shook everyone is that — since 1929 — the Ambassador Bridge has never been disrupted like it was that week,” said Moroun.

Officials in Windsor, Ont., are hoping to reopen the Ambassador Bridge border crossing after police arrested 25-30 people on Sunday and cleared the week-long blockade at one of the country’s most important trade routes. 3:14

“The province, the federal government of Canada … We all got a black eye during the blockade,” he said. “There was a sign that was figuratively hung over all of us that said: ‘Closed for business,’ and that’s not a good look. We’ve got to make sure that a sign like that never gets hung over us or our economy again.”

Moroun is not thrilled the Ambassador will soon compete for truck traffic with a new span, but he insists that battle is behind him.

He is in talks with the City of Windsor, Transport Canada and other federal agencies to meet the requirements needed to build his own new bridge and get moving on a $50-million customs plaza expansion.

In 2017, the government of Canada, through an order in council, agreed that the Ambassador owners could build a new bridge if they met a list of conditions.

Those conditions include safety, security and public-impact consultations with the City of Windsor over the relocation of roads, utilities and a firehall.

That process is confidential according to the city’s lawyer, Piper Morley.

“We can say that to date, the conditions of the International Bridges and Tunnels Act that engage the city’s interest have not been met to the city’s satisfaction,” Morley said in an email to CBC.

The Canadian Transit Company — a Moroun-held company that runs the Canadian half of the bridge — must acquire all the properties impacted by the new span, which would be built west of the old one.

All the buildings on those properties must be demolished and the land developed into public park land.

Moroun would like to see more “urgency” in getting the revamp going, but he knows he’s also running up against a legacy of ill will because of past actions.

Over the years, animosity built up over his father’s aggressive tactics to keep a near monopoly on truck traffic, duty-free gas sales and cargo crossings into Canada.

In 2009, the Metro Times depicted the elder Moroun, whose net worth was estimated to be $1.5-billion US at the time of his death, as Detroit’s Mr. Burns, the “angry old rich man” of Simpsons fame, in a full-page spread depicting him greedily rubbing his hands together in front of the Ambassador Bridge.

At 84, he was arrested and briefly jailed for failing to comply with an order to finish building ramps on the Detroit side of the bridge that connected the Ambassador to nearby expressways.

In recent years, he launched an aggressive campaign against the construction of the publicly funded Gordie Howe bridge, taking out ads, lobbying for a referendum to be held on it in Michigan and fighting the project in court.

‘We kept that bridge humming’

Moroun acknowledges years of “acrimony” and “regretful” acts but defends a man who he says always worked hard to “do the right thing.”

When Moroun took over, business analysts were buzzing about how the son would set himself apart from the outsize personality of the patriarch.

Law professor John Mogk, of Detroit’s Wayne State University, specializes in urban issues and has noticed the younger Moroun is more civic-minded and flexible than his combative father.

But, he says, ultimately, a business owner must always consider the bottom line.

Delaying competition, while continuing to collect an estimated $60 million US a year in tolls and revenue from the duty free business the Morouns control, may have frustrated those eager to build a new bridge and improve the flow of cross-border traffic but made business sense, Mogk said.

“We’re talking about real money. I’m not sure how many people would react differently than [the Morouns] did,” he said of efforts to kill the Gordie Howe project.

Building the Gordie Howe bridge made sense when it came to addressing security and business fears about what would happen if the Ambassador were damaged or blocked, Mogk said.

“I think it’s in the best interests of Canada [and] the United States to have a nice, new, modern bridge,” said Mogk.

The next bridge to cross

For now, the Ambassador Bridge remains the main trade route for trucks between Windsor and Detroit and is the busiest crossing in North America.

About 25 per cent of trade between Canada and the U.S. passes over the aging span.

But all that may change when the Gordie Howe bridge opens, offering trucks a shiny new, six-lane alternative.

Moroun said he would have liked to have been the first to build the second span across the Detroit River.

“We tried very hard to be in a position where we would be building that second span and maybe one day we’ll be allowed to. I look forward to that,” he said.

“But I think the main thing is that all bridges need to be protected. They need to be supported.”

The new structure was financed almost entirely by the Canadian government. It will be the longest cable-stayed span in North America at 853-metres across, with on-ramps situated about two kilometres east of the Ambassador.

The bilateral project was first proposed 20 years ago.

Once complete, it will be the largest port facility along the Canada-U.S. border, according to the Windsor-Detroit Bridge Authority. Heather Grondin, vice-president of corporate affairs and external relations for the authority, says the bridge will allow direct access from a highway onto Michigan’s interstate system, which will be a “significant benefit” for commercial traffic.

“It’s been a long time coming. The project was first discussed back in 2000,” she said.

Moroun says he’s not looking to be defined as “the greatest corporate citizen.” He just wants to be treated fairly and seen as “hard working, disciplined and forward-thinking.” But critics say, he’s going to have to prove that.

As for the future of the Ambassador, Moroun is eager to upgrade the “stalwart” structure that’s delivered goods and people across the Detroit River for close to a century of private ownership.

“Who hangs the ownership certificate on their wall doesn’t mean the bridge is going to work any better or worse. That’s kind of a naive view of things.”

Would he ever sell it to Canada?

“That is something that people have talked about for a long time,” Moroun said. “I don’t know. I’m not sure. I’m not sure that they would want the bridge. I don’t really have anything more to say about it than that.”