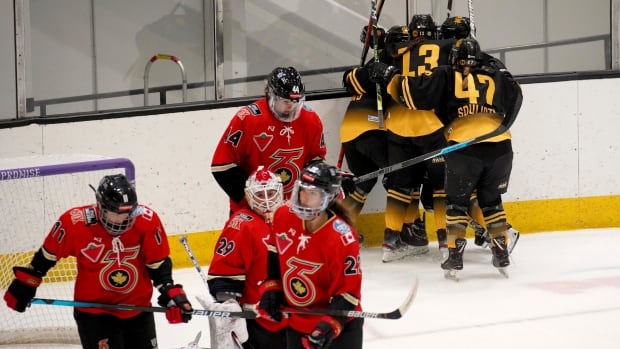 Caught at the finish line for the regular-season title, the Toronto Six can still claim the Premier Hockey League’s ultimate crown and hoist the Isobel Cup on Monday.

The Six are the No. 2 seed heading into the women’s league’s six-team playoffs starting Friday in Tampa Bay, Fla., and thus have a bye to Sunday’s semifinals.

Toronto and the Connecticut Whale await the victors of Friday’s quarter-finals to know their opponents.

The Whale overtook Toronto atop the standings with a 5-0 win in Sunday’s regular-season finale and pipped the Six by just one point.

Toronto had snapped the Whale’s 12-game winning streak the previous day with a 5-4 overtime victory at Danbury Arena.

“The way the point system is in overtime, we led the league in wins, but they had one more point than us,” Six head coach Mark Joslin said.

“We just ran out of gas. We’re good enough and deep enough and I believe we’re driven enough to bounce back and be ready Sunday in Tampa no matter who we’re playing.”

Toronto, which finished the regular season 16-3-1, will take on the highest seed to come out of Friday’s quarter-final matchups between defending champion Boston Pride, Metropolitan Riveters, Minnesota Whitecaps and Buffalo Beauts.

Games will be streamed in Canada by TSN and Monday’s championship game will be on TSN2.

“It’s an advantage for sure to get that bye and watch couple games Friday night and get a little pre-scouting in,” Joslin said. “We know all the teams now but it’s still nice to see a couple of games and know exactly what we’re up against.”

Six rebounding from loss in 2021 final

The PHF was the NWHL for six seasons before rebranding last year. The Six in their second season are the league’s lone Canadian club, although expansion to Montreal is imminent.

Toronto played an abbreviated expansion season in Lake Placid, N.Y., in front of no spectators because of the COVID-19 pandemic.

The Six went 4-1-1 and clinched the top seed in the 2021 Isobel Cup playoffs, which were suspended on the eve of the semifinals because of COVID-19 cases among players.

The Cup was eventually rescheduled in Brighton, Mass., where Toronto lost 6-2 in a semifinal to eventual champion Boston.

‘It would mean the world’

Forward Mikyla Grant-Mentis, the PHF’s leading scorer and MVP last season, believes the Six are capable of reaching the final and winning the Isobel Cup in their second season.

“It would mean the world,” she said.

The 23-year-old from Brampton, Ont., led the Six in scoring again this season with 13 goals and 17 assists in 19 games.

The calm before the storm 😈🏆 <a href=”https://t.co/CQcHZw0ssC”>pic.twitter.com/CQcHZw0ssC</a>

Given her scoring prowess, opposing teams have given Grant-Mentis extra defensive attention lately.

“Connecticut did a good job with her, isolating her a little bit and taking her time and space away,” Joslin said.

“It’s going to be the same [Sunday], so she’s got to learn to fight through that and myself as a coach, I’ll support her with that and get her on ice with the right linemates.”

Hockey Hall of Famer and Six assistant coach Angela James is part of a new ownership group taking over the team.

Former NHL player Anthony Stewart and coach Ted Nolan are among her partners purchasing the team from the U.S.-based BTM Partners.

“I think it’s a great add to the Toronto Six organization, especially having people that live in Toronto, that are from Toronto owning a Toronto team,” Grant-Mentis said.

The women’s league has undergone extensive change in the last two years and the alterations continue.

In the last 18 months, the PHF says it has shifted from a single-entity ownership model to joint venture model, with the six teams owned by private owners in their respective markets.

Commissioner Tyler Tumminia will step down after two seasons as commissioner. She took over from league founder Dani Rylan Kearney in 2020.

Majority of top players in PWHPA

The majority of Canadian and American players in the Olympic women’s hockey final last month in Beijing don’t play in the PHF.

They’re among over 100 women affiliated with the Professional Women’s Hockey Player’s Association (PWHPA) that arose from the 2019 collapse of the Canadian Women’s Hockey League after a dozen years.

The PWHPA’s goal is a sustainable women’s pro league that offers a living wage and the same competitive and medical supports the male pros gets.

The PWHPA has been vocal about wanting the NHL involved in running a women’s league.

Sportsnet reported the NHL has called the PHF and PWHPA together to broker an arrangement that would bring the two women’s hockey entities together.

“The NHL requested us to attend,” PWHPA operations consultant Jayna Hefford confirmed to The Canadian Press in an email without providing further details.