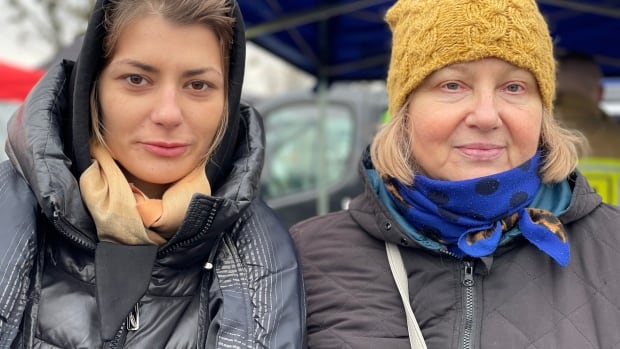 Liudmyla Kuzmina and Kristina Goncharova live more than 500 kilometres away from each other in Ukraine. Kuzmina is 67 and Goncharova is 28. Without the war in their home country, it is unlikely the two would have ever met, but now they sit together in the parking lot of an empty shopping mall in Przemyśl, Poland.

They met at a crowded train station in Lviv, Ukraine, as they tried to get out of the country that has faced war for the last 11 days. On the day they arrived, they estimate there were 750 people at the station. They found each other.

Both women left their homes with very few possessions.

“Here is my handbag, where there are documents, passports and some medical supplies. And there are things that I packed very quickly — a change of clothes, the same is in my backpack. That’s it,” Kuzmina, who is from Kyiv, said through a translator.

Goncharova wears a vest over her jacket that she got from the piles and piles of donated clothing.

Both have come alone and left family behind. Kuzmina’s 38-year-old son was drafted to fight in the war against Russia, which invaded Ukraine late last month. Goncharova’s mom and grandmother stayed in Zaporizhzhia.

They are among the 964,000 people who have crossed from Ukraine into Poland since Feb. 24. On Sunday, the day they arrived, 81,400 people had crossed by 3 p.m., according to the Polish Border Guard.

Both women said they didn’t plan on fleeing after Russian President Vladimir Putin ordered his troops to invade Ukraine.

“We didn’t mean to leave at all. Because my friends said that it was about to end, that it’s not real. This is some kind of dream. Everyone thought so,” Kuzmina said.

The two women sit together charging their phones and eating pasta from paper bowls under a blue tent, waiting for transportation to Stuttgart, Germany. Volunteers buzz around trying to find them the best options. At one point, an option is found, but it’s only to Berlin, so the volunteer in the orange vest leaves to try again.

Buses roll by dropping off more refugees less than a few metres away. People — mostly women and children — from all over Ukraine have descended on this parking lot, finding food, temporary shelter, donated clothing and personal items. There are diapers and strollers, feminine hygiene products and SIM cards.

Inside an abandoned supermarket, each room is numbered and labelled with a destination — Krakow, Warsaw, Czech Republic, Slovakia — and people sleep on cots inside. Children play games. There are racks of blankets, pillows and yoga mats.

People have come from all over Europe to try to help. Some offer rides or drop off supplies. There are licence plates from Poland and Ukraine, of course, but also Germany, Estonia and Latvia.

Arrival here is just the middle of a long journey to a final destination. Ksenia Pletnova spent nine days in a shelter in Kyiv before making the difficult decision to leave with her mother and two-year-old son, Nestor. Her husband, father and sister are still in Ukraine.

They went into the shelter after a building 500 metres away from her home was hit.

“The noise, it was like our building was going down. Yeah, it’s super noisy and it was scary. That day I realized we cannot stay here. We have to go,” Pletnova said.

The nine days they spent in the shelter were like a horror movie, she says, the sounds of the bombing so frequent that her son would imitate the noises like it was a game.

“Boom, boom, boom,” she said the toddler repeats to her.

Pletnova said she will be travelling to Prague to stay with a friend, and she hopes the conflict ends soon so she can go back to the city where she works as a tour guide.

“I love my city, it’s beautiful and I hope it will not be ruined by Putin.”