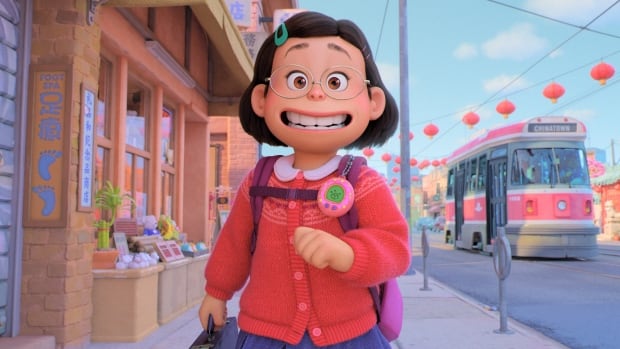 A review posted on website CinemaBlend of Disney-Pixar’s new animated film Turning Red was pulled Tuesday, after some readers lambasted it for ignoring the cultural experience of its creator — and the film’s cast argued that it very much depicts a universal experience.

The film, which premieres on Friday, is directed and co-written by Canadian animator Domee Shi and will be Pixar’s first feature-length film directed by an Asian woman. The movie follows the story of Meilin (Mei) Lee, a 13-year-old Chinese Canadian girl living in Toronto who discovers she has the ability to turn into a giant red panda.

The review, written by CinemaBlend managing director Sean O’Connell, complained that the film’s focus on Lee’s Asian background — as well as plot lines that revolve around Lee’s struggles through puberty as a young girl — limited the film’s ability to connect with audiences.

“I recognized the humour in the film, but connected with none of it,” O’Connell wrote in his review.

“By rooting Turning Red very specifically in the Asian community of Toronto, the film legitimately feels like it was made for Domee Shi’s friends and immediate family members. Which is fine — but also, a tad limiting in its scope.”

The upcoming Disney-Pixar film Turning Red puts Canada in the spotlight with a Canadian director, voice actor and a story set in Toronto. 1:58

When asked whether that might be a problem for audiences, Turning Red‘s cast disagreed.

“Of course not,” Rosalie Chiang, who plays Lee, told CBC News in an interview. “This is a coming of age film, everyone goes through this change … I think different people of different cultures are going to go through it differently, but at the end of the day, the core messiness and change is something everyone can relate to.”

Canadian actor Maitreyi Ramakrishnan — who play’s Lee’s friend Priya — described the story of Lee’s friends and family as “universal,” and that many people will be able “to relate to Meilin’s story, regardless of whether you are a young Chinese girl from Canada or not.”

Much of the criticism around the review stemmed from O’Connell discounting elements of Asian culture as alienating.

The review pointed to another film, The Mitchells vs. The Machines as an animated film that “bothered to include plot elements everyone could find engaging,” and pointed to Turning Red‘s “mystical red panda bit” as particularly difficult for audiences to identify with.

Hours after the post went up — and after hundreds of comments online complaining about the content — CinemaBlend pulled the review, and both O’Connell and editor-in-chief Mack Rawden issued apologies.

“I’m genuinely sorry for my Turning Red review,” O’Connell posted on Twitter. “Thank you to everyone who has reached out with criticism, no matter how harsh.”

“It is clear that I didn’t engage nearly enough with the movie, nor did I explain my point of view well, at all. I really appreciate your feedback.”

In a tweet shared by the CinemaBlend account, Rawden stated the site “failed to properly edit” O’Connell’s review. He stated that the review had been reassigned to another writer, and the site has since added “new levels of editorial oversight.”

We failed to properly edit this review, and it never should have gone up. We have unpublished it and assigned to someone else. We have also added new levels of editorial oversight. Thank you to everyone who spoke up. – Mack Rawden, Editor-In-Chief <a href=”https://t.co/kfkfwlf4q8″>https://t.co/kfkfwlf4q8</a>

In a since-deleted tweet promoting the review, O’Connell further said that while “some Pixar films are made for a universal audience, Turning Red is not.”

“If you are in [the target audience], this might work well for you. I am not in it. This was exhausting.”

When contacted by CBC, O’Connell declined to comment for this article.

Turning Red is scheduled to premiere on Friday, March 11, and currently holds a 94 per cent “fresh” rating on review-aggregate site Rotten Tomatoes.

While it was originally scheduled to debut in theatres as well as online, earlier this year president of Disney Media and Entertainment Distribution Kareem Daniel said Turning Red will premiere solely on the Disney+ streaming platform “due to the delay in the recovery of family films in theatres caused by the ongoing pandemic.”