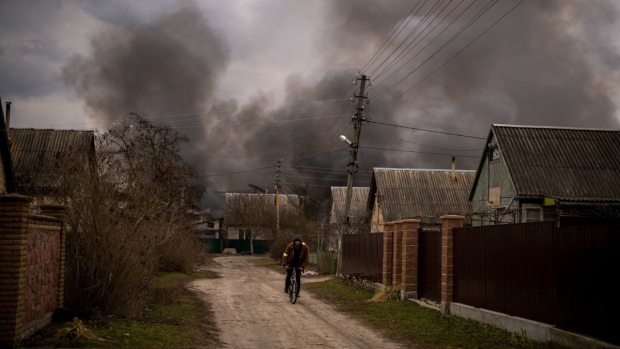 As Ukrainians and Russians fight on the battlefield, both sides are also fighting an information war online and in the media space.

Experts have made note of Russia’s use of disinformation or cognitive warfare, including the perpetuation of notions that Russia is a victim and under constant threat, in this case by Ukraine.

Analysts have seen a wave of anti-Ukrainian content since the invasion began late last month, and some tech companies have taken steps to limit the impacts of Russian state-owned media.

Russia also has made a number of accusations to justify its war in Ukraine, while pushing back against reported military setbacks, civilian deaths and reports calling the offensive an invasion.

Russian President Vladimir Putin has made it a crime, punishable by up to 15 years in prison, to spread what Moscow deems “fake” reports.

Here are some of the narratives Russia has and continues to put out, which many in the West have called propaganda.

RT News and Sputnik are no longer available to download on Apple’s App Store outside Russia, and Microsoft isn’t displaying ads from RT and Sputnik or including RT’s apps in its app store.

However, numerous images and videos have shown residential areas across Ukraine being shelled, killing civilians.

Investigative journalist Justin Ling told CTV’s Your Morning on March 2 that Russia is particularly good at creating whole new narratives which, in this case, are designed to weaken Ukrainian morale and western support for the country — explaining the invasion as something “altruistic and good.”

“On a number of Russian disinformation channels, including some channels from Americans and Canadians, you’re seeing this narrative that the reason that Russia invaded Ukraine was to destroy bioweapons facilities in Ukraine, I think probably borrowing a page from the U.S. invasion of Iraq some 15 years ago,” Ling said.

“But you’re seeing this notion spread that Russia has a secret purpose for why it’s really launching this invasion and we should always be wary of any government or any channels linked to governments telling us that there’s some secret plot afoot that really explains their motives.”

The fact-checking websites PolitiFact and Snopes, as well as other media, have called this claim about bioweapons facilities false, pointing to a program between the U.S. Defense Department and Ukraine aimed at stemming biological threats.

The U.S. embassy in Ukraine addressed the claim as early as April 2020.

Putin and Russia have maintained that their “special military operation” is meant to demilitarize and “de-Nazify” Ukraine, something Russian state media such as Sputnik have continued to reference.

Russia also has accused Ukraine of committing genocide against Russian speakers in the Donbas region of eastern Ukraine, where Russian-backed separatists in Donetsk and Luhansk declared their independence in 2014, following Russia’s annexation of Crimea that same year, resulting in armed conflicts.

No evidence has been brought forward to support claims of genocide against Russian speakers in Ukraine.

Late last month, Ukraine filed a suit against Russia in the International Court of Justice in The Hague, Netherlands, rejecting Moscow’s claim that it launched its invasion to prevent genocide.

Efforts to “de-Nazify” Ukraine may be in reference to the Azov Battalion, a national guard formation aligned with Ukraine that does espouse neo-Nazi views and has been accused of torture and other war crimes.

However, Ukraine President Volodymyr Zelensky is himself Jewish.

“There are obviously differences in how people are consuming the news, but the Putin regime, I think it’s fair to say, is allergic to the truth about its invasion of Ukraine,” Wesley Wark, senior fellow at the Centre for International Governance Innovation in Waterloo, Ont., told CTV’s Your Morning on March 3.

“They have insisted that all media in Russia report it as a special military operation. They are telling certain stories about the war in Ukraine, which focus on Russian military successes, no account of Ukrainian resistance.”

Russia has accused Ukraine of committing war crimes, such as using women and children as human shields, Wark says.

But Russia appears to be losing the propaganda war as far as how Ukrainians, and the international community, is perceiving the conflict as evidenced by the United Nations’ overwhelming call for Russia to end its invasion of Ukraine.

Putin may ultimately be unsuccessful in controlling the information war domestically, Wark says.

“If it loses that support, it’s in potential existential danger in a way it’s never been before.”

With files from CTV News, The Associated Press, Reuters and CNN