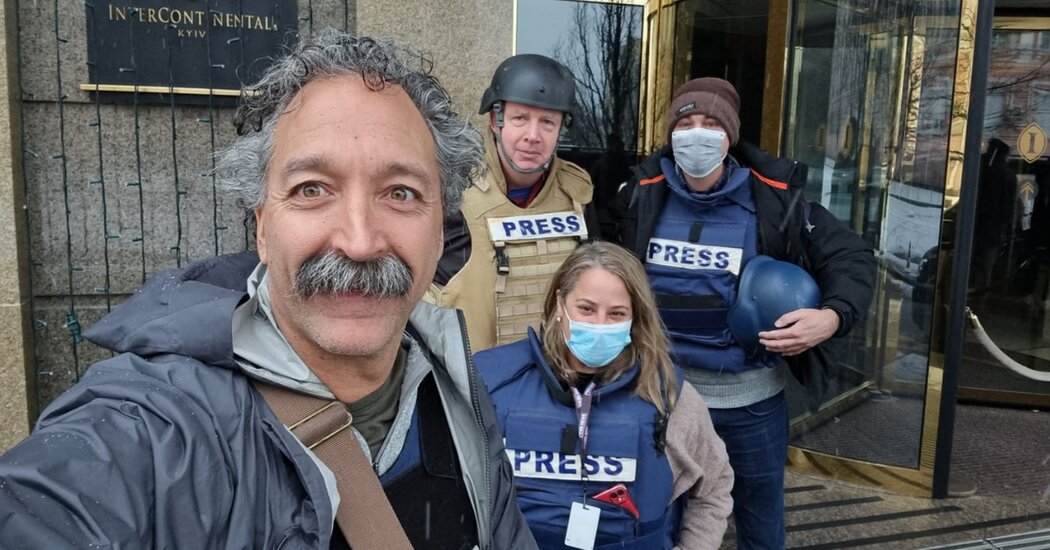 A Fox News cameraman and a Ukrainian journalist traveling with him were killed on Monday in Ukraine when their vehicle came under fire outside Kyiv, according to the network and Ukrainian authorities.

The cameraman, Pierre Zakrzewski, 55, and the Ukrainian journalist, Oleksandra Kuvshynova, were traveling in the same vehicle as the Fox News correspondent Benjamin Hall, who was also injured in the attack in the town of Horenka. Mr. Hall remained hospitalized in Ukraine; Fox News has not shared additional details about his condition.

Mr. Zakrzewski was a veteran reporter at Fox News who reported from many war zones. He had been reporting for the network in Ukraine since February.

Ms. Kuvshynova was a local journalist working with the Fox News reporting team. The Ukrainian interior ministry confirmed her death.

Suzanne Scott, the chief executive of Fox News Media, wrote in a memo to the network’s staff that it was “a heartbreaking day.”

“Pierre was a war zone photographer who covered nearly every international story for Fox News from Iraq to Afghanistan to Syria during his long tenure with us,” Ms. Scott wrote.

“His talents were vast, and there wasn’t a role that he didn’t jump in to help with in the field — from photographer to engineer to editor to producer — and he did it all under immense pressure with tremendous skill. He was profoundly committed to telling the story, and his bravery, professionalism and work ethic were renowned among journalists at every media outlet.”

The director general of the U.N. Educational, Scientific and Cultural Organization, Audrey Azoulay, on Tuesday condemned the attack that led to the journalists’ deaths. “Journalists have a critical role in providing information during a conflict, and should never be targeted,” she wrote. “I call for the respect of international humanitarian standards, to ensure that journalists and media workers are protected.”

On Sunday, the American filmmaker and journalist Brent Renaud, 50, was shot and killed while reporting in a suburb of Kyiv.

Mr. Zakrzewski, who was based in London, also assisted Fox News in its efforts last year to extract its Afghan staff members from Afghanistan after the Taliban took control of the country.

“Pierre was a constant in all of our international coverage,” Jay Wallace, the president of Fox News, wrote in the memo. “I, like countless others, always felt an extra sense of reassurance when arriving on the scene and seeing him with camera in hand. The legacy of his positive spirit, boundless energy and eye for the story will carry on.”

Trey Yingst, another Fox News foreign correspondent who is reporting from Ukraine, posted a photograph on Twitter of himself and Mr. Zakrzewski.