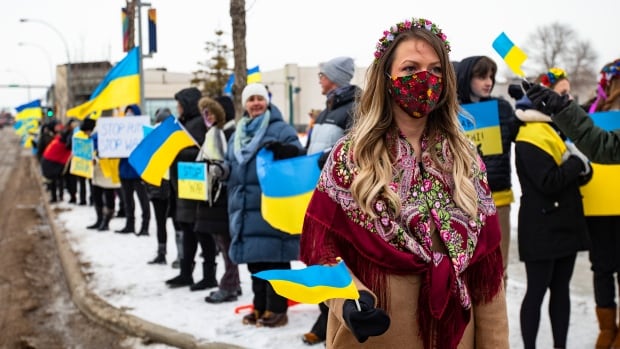 As Canadians watch the conflict in Ukraine that has already displaced more than a million people from afar, many are wondering what they can do to help.

Canadians across the country have joined rallies in support of Ukraine in past weeks, and many communities have come together to raise funds in support of humanitarian efforts.

If you’re wondering how you can get involved, CBC spoke to an expert about what to keep in mind when deciding how to show support through donations.

Communities across Canada have been organizing donation drives to help Ukrainians, collecting everything from medical supplies to warm clothing.

But according to Kate Bahn, managing director of Charity Intelligence Canada, an organization that researches charities and aims to help people make informed decisions about where to donate, it’s best to avoid sending boxes of donations.

Getting food or clothing delivered in Ukraine is a logistical nightmare, according to Bahn.

“The ports are closing, the highways, too. Getting trucks and lorries and air shipments into Ukraine is just not possible at this time.”

She said that most supplies aren’t likely to make it to the region or end up in landfills and that people would be better off donating money directly to charities instead.

Bahn said it’s important to make sure the charity you choose will send your money “as close to Ukraine as possible, as quickly as possible.”

She said many charities will keep your money for several years before sending it to people or organizations on the ground because they want to promote “long-term development,” though studies have shown that aid is most effective when provided quickly.

To make sure your money gets to Ukraine quickly, Bahn said it’s important to donate to charities with good track records that already have people on the ground near Ukraine or that have strong connections to Ukrainian organizations.

The donor reports provide information about how much money was raised in the appeal, when it was spent, what it was spent on and who it helped.

Based on this information, Charity Intelligence Canada recently published a list of credible charities and organizations offering humanitarian aid in Ukraine.

“Some charities are much faster and better than others and it really matters which charity you support,” said Bahn, who strongly encourages people to do their research before donating money.

The European Union has introduced a temporary measure to allow Ukrainians fleeing the Russian invasion to enter any member country. The new rules are a welcome respite, but do little to help those struggling to escape Ukraine. 2:32

Be aware of scams

There have been several reports of scammers taking advantage of the chaos surrounding Russia’s invasion of Ukraine to make quick money.

Charity Intelligence has received reports from donors who were victims of credit card scams when trying to donate to Ukraine.

She also said it’s best to avoid giving cash to people going door to door or to people canvassing in public spaces.

As Ukraine fights back against Russia’s invasion, many people in other parts of the world have been booking stays in Ukrainian Airbnbs with no intention of staying as a way to financially support Airbnb hosts in Ukraine.

Airbnb CEO Brian Chesky tweeted Friday that in just two days, more than 61,000 bookings had been made in Ukraine. Of the bookings, the company told CBC News nearly 3,000 were made by Canadians. It also said it would temporarily waive guest and host fees in Ukraine.

Cheryl Andrews of Edmonton recently booked an Airbnb stay for April in the Ukrainian capital of Kyiv — which is currently under siege by invading Russian troops.

“I saw somebody say, ‘Here’s a great way to reach out directly to a person in Ukraine. Not so much give them money, but let them know people are hearing this, this is a world-wide issue,’ ” Andrews told CBC News.

“I saw somebody else had done it and I thought, ‘This is brilliant, I’m going to jump on that.’ “

Several Canadian banks have also waived wire transfer fees to Ukraine to encourage those wanting to send money directly to those in the war-torn country.

A Canadian veteran — and former sniper — heads to Ukraine to fight against the Russian invasion. 2:00

Canada is one of only a few countries in the world that allows citizens to sponsor and personally resettle refugees.

Canadians across the country have already begun crowdfunding and offering up their homes in hopes of welcoming Ukrainian refugees.

“You don’t want the situation like with the Syrian Civil War, where refugees were left or moved to semi-permanent tents in isolated communities, where you get those massive refugee camps that go on for years and years,” said Bahn.

“You definitely want the refugees to be able to come into your communities, not be isolated, be supported, be able to work.”

As the federal and provincial governments work out how to streamline visa applications from Ukrainians fleeing the war, a Quebec City lawyer has already gathered nearly 200 names of Canadians willing to host refugees.

Alexandre Dufresne, who has no personal connection to the country, said he figured the best way he could help would be to provide a temporary home to refugees once they find their way to Canada.

As of Friday morning, more than 120 people had filled out an online form he created to manage the requests as they began to multiply.

Most of the people who answered his call are from Quebec, Dufresne said, but there are also people from Manitoba, Ontario, Alberta and Saskatchewan.

Dufresne said he is looking for help to manage the group and trying to find out whether people would be willing to get together to sponsor refugees.

What Canada is doing to help

The Canadian government has so far committed $125 million in humanitarian aid for Ukraine.

It includes $115 million for experienced humanitarian partners in Ukraine, and up to $10 million to the Canadian Red Cross through a matching fund for its Ukraine Humanitarian Crisis Appeal.

All across Ukraine, communities like Kopychyntsi are mobilizing to provide supplies for both soldiers fighting against invading Russian forces and the people fleeing for their lives. 2:13

Immigration Minister Sean Fraser announced Thursday the federal government has created two new pathways for Ukrainians to come to Canada as part of a plan to accept an “unlimited number” of people who want to leave.

Fraser said his department has created a new visa category that will allow an unlimited number of Ukrainians to come to Canada to live, work or study for up to two years.

He also announced that the government is introducing an “expedited path” to permanent residency for Ukrainians who already have some family in Canada.